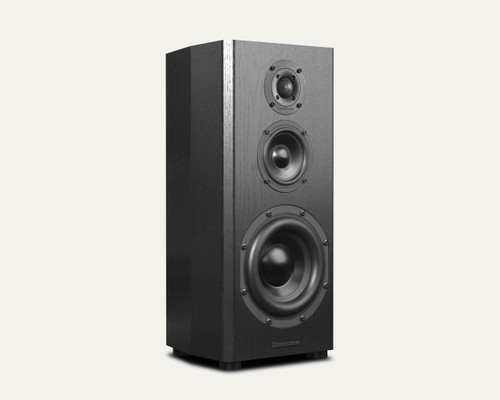 The Mini T Active Loudspeaker combines decades of research into acoustics, electronics, amplification, and state of the art components to recreate your recordings with stunning realism. Fully active loudspeaker systems dispense with passive crossovers found in conventional loudspeakers in favor of inserting the crossovers before the amplifier. The benefits include increased flexibility of filter shapes, the ability to make fine-grained adjustments resulting in improved on and off axis response (these are often competing objectives in passive loudspeakers), direct coupling of the amplifier to the driver (avoiding losses inherent in passive crossovers), and higher SLP with lower distortion.

The Mini T Active Loudspeaker was built to be exceptionally high quality and affordable, while bringing superior design to the table. New driver designs, enclosure vibration analysis, and anechoic chamber testing all went into creating an amazing product. A “state of the art” audio system involves what some refer to as a “suspension of disbelief”. This means the playback system transcends the recorded medium and transports you to a live venue. You forget it’s a recording and believe you are there at the live performance. Our goal with the Bryston Mini T Active Loudspeaker is to provide our customers with a superior level of “disbelief”.

The Mini T Active Loudspeaker requires the BAX-1 Active DSP Crossover and three amplifier channels per speaker. We recommend two 21B³ three channel amplifiers (one for each loudspeaker) to create a complete system. This combination will create an optimum listening experience. A superbly designed active loudspeaker system can bring higher resolution and dynamic control to your audio system. The differencesare far from subtle and the Bryston Active Loudspeaker System takes the performance to the next level.

Everything is relative, so when we call this the Mini T, it's really only "mini" when compared to the rest of the T lineup. That said, it's still a shelf/stand model. When atop a Target MR stand with our custom plates, the Mini T's performance is really more like that of a great floorstander. Bass is prodigious, dynamics are vast. imaging is beyond comprehension and it's clear as a bell. The Mini T is a frequent star of our hi-fi shows and never ceases to amaze both the audience and us! As a direct descendent of the Model T, you should expect nothing less.

Bryston offers three models of Active Loudspeaker plus 3 more T-Rex Active models. Each loudspeaker is expertly constructed in Canada and finished by talented craftsmen in the fine wood of your choosing. No internal crossover is present, Each driver section is powered directly from the attached amplifier. Whichever you pick, expect realistic tone, lifelike three dimensional space, and incredible clarity. All models are protected by Bryston’s legendary 20 year warranty.

Unlike with so many other active loudspeaker systems, with our models amplification is more than simply an afterthought. Each loudspeaker requires three amplifier channels—one for high frequency, one for midrange, and one for low frequency. A compact and attractive solution is our 24B³ Cubed Series model which contains 300 watts per bass section plus four more 75 watt channels for the midrange and high frequencies. For more power, use a pair of 21B³. Each of these three channel ‘mono blocks’ has a 600 watt bass channel plus two 300 watt MF and HF channels. Or, leverage Bryston’s extensive catalogue and build your own amplifier complement.

Inside the all new BAX-1 DSP Crossover lies the magic that elevates the system to a new ultimate performance. The BAX-1 receives line level analog audio from your preamp and converts it to digital with exacting precision. Like a traditional crossover, bands are divided, but response is also corrected. Our engineers use the powerful DSP engine to precisely neutralize system response errors that would otherwise go uncorrected. Low, midrange, and high frequency outputs are generated which then feed 6 amplifier channels. Do you want a custom sound? You can even custom tailor the bass response to match your room using the on-board web based user interface.