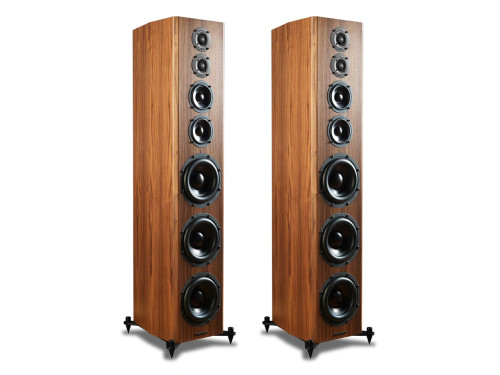 Bryston never meant to start making speakers. The Model T began as a project between Bryston's James Tanner and Ian Colquohoun to develop the ultimate loudspeaker which could reproduce music with the same fidelity as our electronics. The Model T was born and quickly friends and the Bryston family put in orders for their own pairs. Emboldened by such early excitement, we distilled a full line.

The Model T achieves 118dB of dynamic range before it even starts to compress by using multiple drivers for each of it's 3 sections. By moving twice as much air, we keep distortion to a minimum even at high output levels. The small diameter drivers, along with careful crossover tuning and cabinet construction make for the broadest dispersion characteristics among large speakers out there. This in turn makes the sweet spot far wider than audiophiles have come to expect. If you can't have fun with these speakers, maybe you should buy a boat instead.