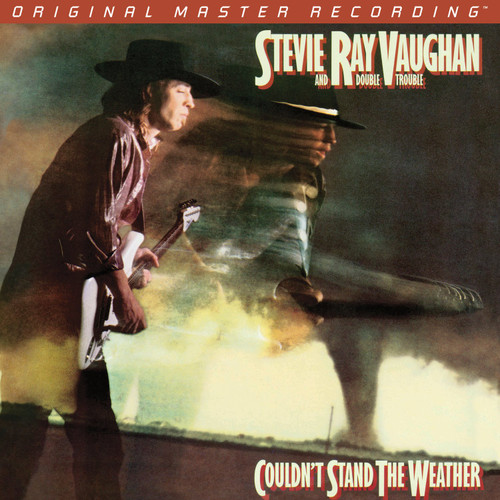 SKU:
UDSACD2075
UPC:
821797207560
Availability:
Items on stock ships within 2 days. To order out of stock items, contact us on orders@sepeaaudio.com. We will update you on availability.
Shipping:
Calculated at Checkout
Format:
1x Numbered Hybrid SACD
Genre:
Jazz
WB Cat.#:
UDSACD2075

Like the destructive tornado on the album's cover, Stevie Ray Vaughan's Couldn't Stand the Weather blows with gale-force intensity, moves everything in its path, and contains beautiful moments of calm at its center. Caught up in the momentum gained from his brilliant debut, the guitar slinger comes on with a startling degree of authority, confidence, and swagger that hadn't been witnessed in the blues realm in decades.

At last, this incredible tour de force has been finally been done right. Surpassing the myriad inferior remastered and reconfigured editions, we went straight to the source – the original master tapes – to produce a version of Couldn't Stand the Weather that will last a lifetime. The numbered edition hybrid SACD brings Vaughan and Co. into your listening room and places them at your feet. Vaughan's trademark Fender Stratocaster has never sounded more lifelike, powerful, or authentic.

By the time Vaughan and Double Trouble entered the studio in January 1984, the band's reputation as the hottest blues-rock act in the world had been cemented. Vaughan even declined a juicy offer to tour as part of David Bowie's band in order to live out his own dreams. And this proud Texas boy doesn't mess around. Pulling no punches and embracing his role as blues' modern ambassador, Vaughan's scorching 1984 record epitomizes his hallmark styles and moods: brazen, ferocious, mesmerizing, cathartic, defiant, soulful, all at once.

Here, in the form of the jaw-dropping version of "Voodoo Chile (Slight Return)," is Vaughan's touching acknowledgment of Jimi Hendrix's looming influence. And in the hopping instrumental "Scuttle Buttin'," there's a lingering taste of the guitarist's playful personality and pyrotechnic skill. "Cold Shot" bleeds with a lover's scorn, but like a determined fighter, Vaughan picks himself up off the canvas and rears, ready to make another go. Brother Jimmie Vaughan assists on the title track, redolent with the slinky rhythms gleaned from rural Texas bluesman and down-home attitudes.

As he did on Texas Flood, Vaughan closes out the record in high style, bringing the concoction of smoldering blues, sultry shuffles, and jukejoint boogies to a simmer with the instrumental "Stang's Swang" – dedicated to jazz great Grant Green and punctuated with Stan Harrison's fiery tenor saxophone lines. Gutsy, gritty, and ceaselessly original, Couldn't Stand the Weather served further notice that Vaughan was here to stay and demanded to be heard. The double platinum sales figures and Grammy nominations were additional confirmation of that fact.

Our numbered edition hybrid SACD brings the images of Vaughan's street-wise stare, lived-in cowboy boots, lightning-fueled fingers, and Palladin hat into pristine focus. More importantly, the searing tones from his '59 Stratocaster guitar, drawl of his raspy voice, and every strategic bend of the strings are captured with extreme delicacy, so you don't miss a note. The soundstage is deep and wide, and the microdynamics simply pop. Welcome to Texas, Stevie Ray style. It doesn't get any better than this.