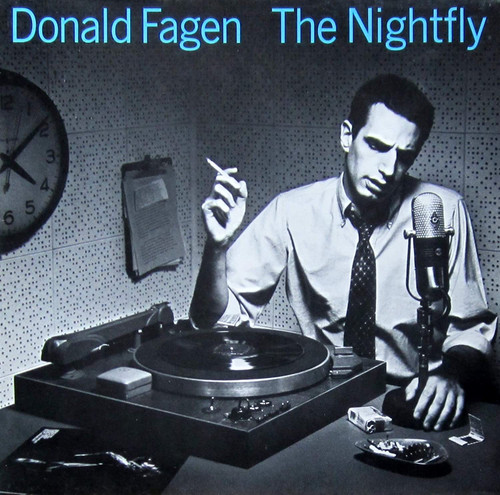 After eight years and seven Steely Dan albums packed with questionable characters moving through all sorts of seedy situations, Donald Fagen went surprisingly personal on his debut solo album, The Nightfly. The album was titled after a character--Lester the Nightfly--created by Fagen based on jazz radio DJs he listened to as a kid in the 1960s.

"This album is vaguely autobiographical – I think it’s possible to be more personal and subjective when you’re working by yourself," Fagen told NME in 1983 (via The Steely Dan Reader) about how his solo work differed from Steely Dan. "Walter (Becker) and I had a collective identity. I still try and maintain a distance, but it has to be more personal too.

"I used to live about 50 miles outside New York City in one of those rows of prefab houses that all look the same. It was a bland environment," Fagen continued "One of my only escapes was late night radio shows that were broadcast from Manhattan – jazz and rhythm and blues. To me the disc jockeys were very romantic and colourful figures and the whole hipster culture of black lifestyles seemed much more vital to a kid living in the suburbs as I was. A lot of kids went through the same thing, although I guess as I listened to Jazz I was in a minority. That’s why there was an explosion of hipsterism in the ’60s, although it turned into something else."

The era was also known for the prevalent Cold War with the Soviet Union, leading to such phenomenons as backyard bomb shelters and American classrooms conducting preparation drills in case the Big One was dropped in the U.S.

"This is a parallel between America of that time and America today," Fagen told NME in 1983 when asked why the album had such a focus on the Cold War era. "It’s relevant culturally and, to a certain extent, politically. The main reason is that I’m 34 and I started thinking about why I became a musician. I was headed toward a different kind of life, really, maybe an English teacher or something like that. I studied literature at college and basically had my course set out for me. When the ’60s came along I perceived that there were other options and, since music was my hobby, I decided to try and make a living at it."

Working with an esteemed cast of session players including Greg Phillinganes, Larry Carlton, and Steve Jordan, Fagen and company crafted one of the earliest examples of a fully digital recording. It required album engineers to take an actual class on digital technology. There were enough snafus along the way for Fagen to want to throw in the towel on the whole process: "I was ready to transfer to analog and give it up on several occasions, but my engineering staff kept talking me into it."

After eight months of recording and 10 days of mixing, the LP was ready to go. The first sounds from the album arrived September 1982 in the form of lead single, "I.G.Y."

"Probably both the first two," Fagen revealed to NME if this look back was inspired by nostalgia, bitterness or regret. "I don’t know about regret. Certainly it was a more innocent and idealistic time. ‘I.G.Y.’ is a child’s view of the future with technology solving the world’s problems, a gleaming future. Very little of that came about and we’ve also found out that technology creates more problems than it solves. I guess I just wanted to look back."

"You'll hear a little blues guitar played by Larry Carlton, and it's kind of a track reflecting the spirit of the times," is how Fagen described "New Frontier" on The Charlie Gillett Show on London's Capital Radio in 1988. "The storyline is basically about a bunch of kids who have a party in a fallout shelter while their parents are away for the weekend."

The Nightfly was a resounding success for Fagen's debut solo outing, almost crashing the top 10 with a #11 peak on the Billboard 200.

"It’s bizarre. Coming out of jazz, it’s different from the way most groups go," Fagen said in 1983 about his place in the world of music. "They start with very little musical knowledge and have different theatrical values. I’m not even sure what kind of music it is I do. I suppose you’d have to call it rock ’n’ roll. I think all the other influences lend a complexity that pop music doesn’t have, though. Although irony seems to be the perspective through which most people see the world these days, whether its in pop music or whatever, and as far as attitude goes a lot of people have caught up with that."