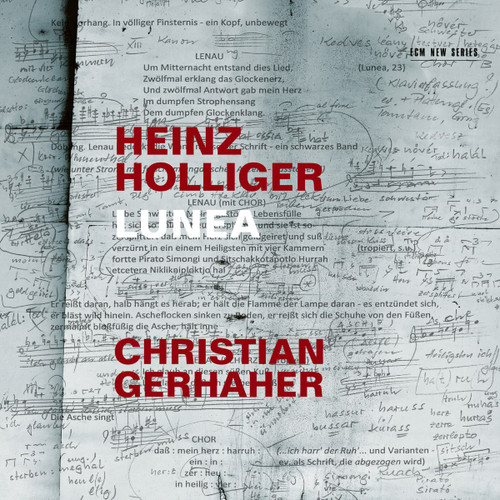 Heinz Holliger’s “dream opera” Lunea which was premiered, to great acclaim,  at Opernhaus Zurich, interweaves strands from the life and mind of Nikolaus Franz Niembsch (1802-1850), the Hungarian-born Austrian poet who wrote under the name Nikolaus Lenau. Lenau’s last, fragmentary writings have fired Holliger’s imagination and led to the creation of an intricately inventive work with a marvellously evocative lead role for baritone Christian Gerhaher. Neue Zürcher Zeitung: “Here Gerhaher can display his full sensitivity in dealing with the finest nuances of language and bring to bear his almost unlimited spectrum of tonal-dynamic gradations in the intonation. The poet Lenau speaks most directly from the sounds and notes...” The 2-CD set, in slipcase, is accompanied by an an extensive 120 page German-English booklet with the full libretto by Händl Klaus and synopses of each of the opera’s 23 scenes, as well as a liner essay by Roman Brotbeck, a performer’s note by Christian Gerhaher, score fragments, performance photography, and more.

An impressive psychogram of the poet Nikolaus Lenau — and a tailor-made role for the baritone Christian Gerhaher. Here he can display his full sensitivity in dealing with the finest nuances of language and bring to bear his almost unlimited spectrum of tonal-dynamic gradations in the intonation. The composer on the podium is the best advocate of his originally orchestrated music, combining intimate knowledge of the score with the emotional engagement of the performing musician. Thus the poet Lenau speaks most directly from the sounds and notes...
Christian Wildhagen, Neue Zürcher Zeitung

Heinz Holliger’s “dream opera” Lunea (2017), subtitled Lenau-Szenen in 23 Lebensblättern [Lenau scenes in 23 leaves from a life], with libretto by Händl Klaus, is the Swiss composer’s most complex piece of music theatre to date. It is also a work that continues the sequence of biographical ‘portraits’ delineated in Holliger’s remarkable recordings for ECM New Series.

As Roman Brotbeck points out in an insightful liner essay, Holliger’s focus in his compositions has often been on the work and thought of artistic outsiders. It is the marginal figures who most fascinate him, the ones who followed their creative visions to the brink of madness. He seeks to give voice to their suffering, with music functioning as “a form of solace”. This, broadly, is the impulse that links such distinctive work as the Scardanelli-Zyklus on the late poetry of Friedrich Hölderlin, the opera Schneewittchen, after Robert Walser, the Violin Concerto as a tribute to painter Louis Soutter, and the chamber music work Romancendres, a sorrowful protest against Clara Schumann’s burning of her husband’s cello romances. Now comes Lunea.

The opera – which was premiered at Opernhaus Zurich in March 2018 - interweaves strands from the life and mind of Nikolaus Franz Niembsch Edler von Strehlenau (1802-1850), the Hungarian-born Austrian poet who wrote under the name Nikolaus Lenau. Lenau spent some of the last years of his life in an asylum near Stuttgart where he wrote fragmentary texts of almost surrealistic vividness - describing himself, for instance as “an echo nailed to the rock,” and the moon as “a luminous floating tomb.”

Holliger first set some of these inspirations in a song cycle for baritone and piano he called Lunea – 23 sentences by Nikolaus Lenau, which was premiered, with Christian Gerhaher as singer, in 2013. Subsequently, Holliger reworked the Lunea settings into his opera, now integrated, as he put it, “like chorales in a Bach Passion.” Lenau’s words become part of a larger text, shaped by Austrian writer Händl Klaus. In the opera, Gerhaher as Lenau holds centre stage – but other important figures from his life drift into view. These voices each embody several characters, with soprano Juliane Banse portraying both Sophie von Löwenthal, the love of Lenau’s life, and Therese Niembsch, the poet’s mother. Second baritone Ivan Ludlow’s roles include Anton Xaver Schurz, Lenau’s brother-in-law and his first biographer, responsible for preserving many of his writings. Soprano Sarah Maria Sun appears as both Marie Behrends, Lenau’s fiancée, and as famed opera singer Karoline Unger. Finally, mezzo soprano Annette Schönmüller sings the parts of Lenau’s sister Therese, his friend Emilie Reinbeck, and his lover Bertha Hauer.

“Everything happens as if in a dream,” writes Roman Brotbeck. Discontinuous, following no immediately logical plot. “Yet nothing is blurred; everything is as clear as glass and laid out by Holliger with maximum lucidity.” The 23 ‘leaves’ of the opera unfold associatively, and move backwards and forwards through time. The opera opens in the insane asylum in Döbling. Händl Klaus: “We are inside Lenau’s head – here tabula rasa reigns, in the midst of life, yet full of life; the ground crumbles beneath his feet as he becomes aware of his own downfall.”

Christian Gerhaher conveys the turbulence of Lenau’s mind through the changing emotional landscape of the opera. “The demands of the vocal parts are a little challenging,” Gerhaher allows in a performer’s note, emphasizing that Holliger’s challenges are purposeful: “The work begins to glow, to embody an empathy that seeks to understand and recreate the most minimal stirrings of the suffering poet.”

From his side, Heinz Holliger has noted: “I could not have written the opera without Christian Gerhaher. I'm sure of that. He's someone very close to me and I was sure he had the sensibility to capture with utmost feeling the unconventional thinking inherent in my opera.”

Lunea marks Gerhaher’s second appearance on ECM New Series. He was previously heard, in 2009, alongside the Rosamunde Quartet on a recording of Othmar Schoeck’s Notturno, a composition also based upon texts by Nikolaus Lenau.

Juliane Banse’s previous ECM appearances include the title role in Heinz Holliger’s Schneewittchen, as well as recordings of Kurtág’s Kafka-Fragmente (with András Keller), Songs of Debussy and Mozart (with András Schiff), Tief in der Nacht (songs of Alban Berg and Karl Amadeus Hartmann, with Aleksandar Mazdar), and Frank Martin’s Maria-Triptychon (with Christoph Poppen and the German Radio Philharmonic).

The range of Heinz Holliger’s artistic activity – as composer and conductor as well as soloist and chamber musician – has been documented on numerous ECM albums. Recent recordings have included Zwiegrespräche, with expressive minitaures by Holliger and his contemporary and friend György Kurtág, as well as readings of French poet Philippe Jaccottet.

2-CD set in slipcase includes extensive 120 page German-English booklet, with full libretto by Händl Klaus, and synopses of each scene. Plus liner notes by Roman Brotbeck and a performer’s note by Christian Gerharher, score fragments from Heinz Holliger, and photography from Opernhaus Zürich.