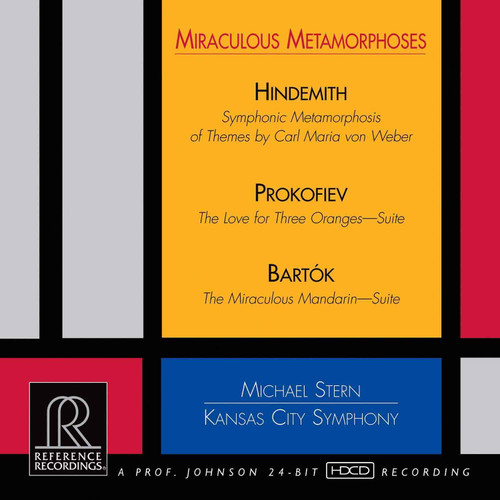 Prokofiev The Love for Three Oranges—Suite

This magnificent new symphonic recording with the Kansas City Symphony contains three classic modern masterpieces. It is also the premiere recording made in the orchestra’s new home, Helzberg Hall at the Kauffman Center for the Performing Arts in Kansas City, Missouri. Conductor Michael Stern’s interpretations of these great works have been captured in brilliant HDCD sound by GRAMMY®–winning engineer Keith O. Johnson. Producer David Frost won GRAMMY awards in 2005, 2009, 2011 and 2014 for Classical Producer of the Year.

This is Reference Recordings’ fourth release with the Kansas City Symphony, and we are most honored to work with them again. The Kansas City Symphony is the region’s only full-time professional symphony orchestra, setting the standard for musical excellence. Led by Music Director Michael Stern since 2005, the Symphony has experienced impressive artistic growth, garnering national and international acclaim. The orchestra’s 80 full-time musicians are area residents, and each season they touch the hearts of more than a million people through their concerts, educational programs and community outreach performances. They also serve as the orchestra for the Lyric Opera and the Kansas City Ballet.

For 38 years, Reference Recordings has been one of the most innovative and respected independent labels in the music business. Founded on the premise that most commercial recordings sound nothing like the live performance experience, Reference Recordings releases have been widely and lavishly praised for their dedication to high quality sound in the service of great music. Founder Tam Henderson (1998 GRAMMY® nominee for Producer of the Year), was joined in 1978 by engineer Keith O. Johnson. Some 130 projects later, RR is still recording what many consider to be the finest-sounding classical, jazz and blues discs in the world.

“Great repertoire, matchless performances, and a superb recording combine for as good a rendition of a modern orchestra that we are likely to get. Highest recommendation.” —Lawrence Devoe, Blu-Ray Definition

“Performances that can stand with the best of them and sonics that sound fabulous even on my computer speakers combine for another Reference Recordings/Kansas City Symphony “hit”. One also has to give the Kansas City Symphony, Reference Recordings and all involved great credit for daring to record major standard repertoire pieces that often have some very heady competition.” —Don Clark (His Best Recordings of 2014 List), Pictures on Silence

“A recent CD on Reference Recordings featuring the Kansas City Symphony (KCS) conducted by Music Director Michael Stern shows they may be vying for a place among the best American orchestras. … Reference Recordings prides itself on producing high-quality live-performance experiences, and this disc is no exception. As with their other recordings, the music on this HDCD jumps out at the listener. It is clear and bright and captures the essence of a live performance. The KCS under the direction of Stern plays with clarity and crispness. Apparently, the KCS has been flying under the radar. But with this new recording, it is soaring higher and could be knocking on the door of the pantheon of American orchestras.” —Henry Schlinger, Culture Spot LA

“Stern and his players put the music across with dash and no little brilliance.”—John Quinn, MusicWeb International

“The Kansas City Symphony have been on a roll with Michael Stern…[Miraculous Metamorphoses] are works that provide conductor and musicians with a spectrum of atmospheres and colours into which they can sink their respective teeth. Stern and his orchestra do so to captivating effect, without resorting to sonic exaggeration. ….” —Donald Rosenberg, Gramophone

“Michael Stern’s Kansas City Symphony performance shows what can be achieved when a band on inspired form makes the effort to play what’s actually written. …It sparkles, abounding in oft-hidden detail.…” —Graham Rickson, The Arts Desk