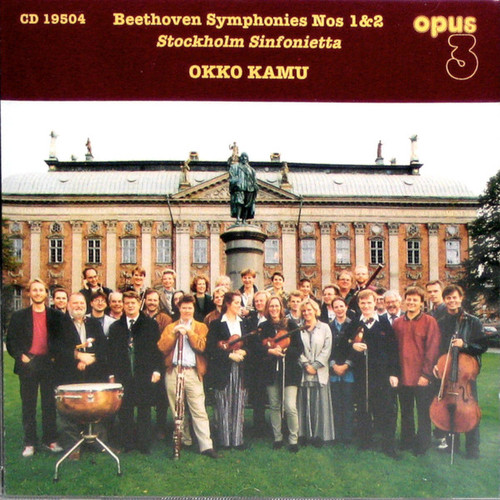 Conducted by Okko Kamu
Beethoven Symphonies No.1 & No.2

The Stockholm Sinfonietta is one of the most respected Scandinavian orchestras of its kind, with an exciting repertoire and a high standard of musicianship which has earned it the best of international reputations. Formed in 1980, it consists of 30 or 40 players from the Royal Philharmonic Orchestra in Stockholm, the Swedish Radio Symphony Orchestra and the Göteborg Symphony Orchestra.Its repertoire extends from the Baroque to contemporary music. The Sinfonietta is regularly seen at the most prestigious music festivals in Scandinavia and Europe, such as the Composer Festival in the Stockholm Concert Hall (Schnittke, Penderecki and Pärt), the Nådendal Festival in Finland and the Schleswig-Holstein Festival in Germany. In addition, it tours Sweden and the European countries regularly. Most recently, at the beginning of 1995, Leif Segerstam took the orchestra on a successful tour of Spain with Roland Pöntinen as soloist.

World conductors collaborating continuously with the Stockholm Sinfonietta include Sixten Ehrling, Jukka-Pekka Saraste, Paavo Berglund, Okko Kamu and Paavo Järvi. Soloists who have collaborated with the orchestra include, for example, Mstislav Rostropovich, Monserrat Caballé, Jose Carreras and Christian Zacharias. The Stockholm Sinfonietta also has a long list of recording credits.