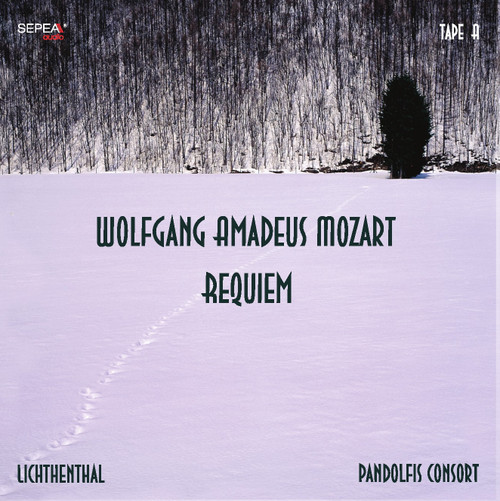 SKU:
SEP0011
UPC:
8588006965117
Shipping:
Calculated at Checkout
On Demand:
Feel free to contact us if you need to customize the tape speed, format, equalisation or other details

Like all our recordings, Mozart´s Requiem was recorded with analogue as well as digital technology. After hours of listening and comparing several mixing consoles, we decided to use the Sonosax SX-T for our location recordings, because of its sonic neutrality and excellent frequency and phase response. Furthermore, the very low distortion and high channel separation give a very detailed sound picture. Together with the Sonodore RCM 402 and DPA 2006 microphones, used for main stereo system, we are able to capture every detail from the stage.

During the whole process we never use any EQs, dynamic processors or artificial reverbs. If some slight "coloration" is needed, a variety of our vintage Neumann, AKG and Geffel microphones serves well as spots or main system. And as a treat, our beloved half-inch Studer A80 RC´s, running at 30 ips, completes the analog chain.

The Pandolfis Consort was founded in 2004 by Elżbieta Sajka-Bachler, viola player und graduate of Kraków Music Academy to bring rarely performed works by famous or forgotten composers to a wider public. The name comes from the violin maker Giuseppe Galieri Pandolfis, who was probably of Greek descent and was a student of Nicola Amati. The Pandolfis Consort plays a copy of a viola dʼamore by Pandolfis. Since the ensemble members like his well-formed instrument, the ensemble was named after the violin maker.

The ensemble has in the intervening period established itself and is regularly invited to perform at international festivals in Poland, Austria, Finland, Spain, Italy, the Netherlands and Slovakia as well as to the International Viola Congress in Krakow/Poland and to Wellington/New Zealand. The performance of Bach’s St John Passion in the Radiokulturhaus Vienna and the appearance at the Ö1 festival Italia mia with a live broadcast in ORF (Austrian radio) attracted nationalinterest. From 2007 to 2013 the Pandolfis Consort organized a cycle “Music in the Deutschordenskirche” in Vienna and since 2013 has been host of the International Heinrich Ignaz Biber Festival in Vienna. Current performance cycles were Telemann 17 and Vivaldi 18, which were dedicated to these composers, respectively.

The ensemble’s repertoire contains some 500 works and extends from early Baroque to Classical to modern music and also includes contemporary compositions written for the Consort. The ensemble’s period instruments set composers the interesting task of adapting their modern tonal language and in this way finding new sounds. In 2012 the ensemble gave the first performances of commissioned compositions by Johanna Doderer (Austria) and Stanley Grill (USA) and, in Innsbruck in 2014, of two works by Tyrolean composer, Franz Baur.

The Pandolfis Consort generally gives concerts in its standard formation of four musicians but also performs with well-known singers or additional instrumentalists.

Maximilian Bratt was born in Stockholm, Sweden. He grew up in a very musical family and his first musical impressions were shaped by chamber music. He took his first piano lessons as a child, shortly afterwards he began to play the violin.

He received a foundation scholarship at the Royal College of Music in London (RCM), where he passed his exams under Professor Irina Zaritskaya (piano) and Felix Andrievsky (violin) with distinction in both instruments. In Vienna, where he has lived since 2002, he completed further studies with violinist Professor Jela Špitková at the University of Music and Performing Arts (MDW) with distinction. Others who made a decisive contribution to his development include Igor Chaczbabian (Norway), Hanna Radwan (Poland) and Christiane Hutcap (Germany).

During his youth Maximilian Bratt won a number of prizes and awards. He twice received a scholarship for study abroad from the Royal Swedish Music Academy. At the RCM London he won the Vivian Hamilton Prize for his interpretation of Chopin’s music and the W. H. Reed Memorial Prize for his ability as a violinist. As a member of a string quartet he was a finalist at the International Haydn Competition in Vienna and as a duo, together with cellist Vida Vujic, won a prize in the Residenz Competition at the MDW.

Maximilian Bratt works principally as a chamber musician and has performed in a number of European countries. He has been engaged several times by the International Chopin Society to appear in Vienna and at the annual festival in Gaming, Austria. Other appearances include the Lindbury Theatre in Covent Garden in London, in Minsk, Belarus, in the Musikverein in Vienna, and at the International Summer Festival Ohrid, Macedonia.

Ingrid Rohrmoser comes from Innsbruck. She developed the wish to learn the violin at an early age. After completing her secondary schooling at the Musikgymnasium in Innsbruck she moved to Vienna, where she studied violin with Professor Thomas Christian at the Konservatorium Wien Privatuniversität. She later expanded her training there by studying viola with Professor Herbert Müller.

She has worked in various Viennese orchestras and has taken part in concert tours of Europe and Asia. She also played in the Radio Symphony Orchestra Vienna, in the Volksoper Vienna, the Stadttheater Baden and the Tiroler Symphonie Orchester Innsbruck. In her work she has received inspiring musical impulses from conductors such as Lorin Maazel, Franz Welser-Möst, Horst Stein and Manfred Honeck.

She is a member of the chamber orchestra Akademie St. Blasius, which specialises in rediscovered works from the 19th and 20th century and in first performances. For BIS Records and “musikmuseum” she has been involved in numerous CD productions.

During her studies she developed an interest in historical performance practice, deepening her knowledge of this area at master courses given by John Holloway, Chiara Banchini and Brigitte Täubl.

Since 2006 her fondness for chamber music and interest in musical rarities has linked her with the Pandolfis Consort. In addition she plays in several Austrian and German early music ensembles such as the Haydn Sinfonietta Wien, Concerto Brandenburg, Capella vitalis and Lautten Compagney.

She lives as a freelance musician in Berlin.

Elzbieta Sajka-Bachler was born in Kraków and is a graduate of Kraków Academy of Music (viola and music education, honours degree). While still a student she substituted with the Kraków Radio Symphony Orchestra (numerous concerts and recordings of contemporary music as well as with world-famous soloists, including Luciano Pavarotti). The collaboration with this orchestra deepened her interest in contemporary music, which she still enjoys playing today.

Elzbieta Sajka-Bachler also studied viola d’amore at the University of Music and the Performing Arts in Vienna and took part in numerous courses for chamber music and early music, for instance with Werner Ehrhardt (Concerto Köln), José Vázquez, the Orchestra of the Eighteenth Century and its concert master Lucy van Dael, and with Helmuth Rilling (Bach-Akademie-Stuttgart).

She plays Baroque viola and works with many ensembles and orchestras in Austria and abroad, including the Barockorchester Johann Josef Fux, the Clemencic Consort, the Haydn Akademie, the Czech Ensemble Baroque, Solamente naturali (Bratislava), Ensemble Inégal (Prague). She is a member of Orchester 1756 and Ensemble 1756 (Salzburger Konzertgesellschaft), of Musica aeterna (Bratislava) and the Hofkapelle Esterházy (Fertöd).

She has performed with, among others, the soloists Ronald Brautigam, Alexei Lubimov, Enrico Onofri and Andreas Staier and under conductors such as Paul McCreesh and Krzysztof Penderecki. She was a member of the Haydn Sinfonietta Wien and of the Concilium musicum Wien.

She lives in Vienna and works in Austria and abroad as a teacher and lecturer at master classes. Elzbieta Sajka-Bachler is the founder and head of the Pandolfis Consort and, since June 2013, head of the International Heinrich Ignaz Franz Biber Festival in Vienna.

Günter Schagerl studied concert violoncello from 1982 to 1989 at the Konservatorium der Stadt Wien with Professor Josef Luitz. After successfully completing his degree examinations he took part in a master course given by Miloš Mlejnik.

He has developed an interest in early music since 1984, he studied Baroque cello with Jaap ter Linden at the Salzburg master courses. From 1991 to 1992 an assistantship at the University of South Carolina (graduate string quartet and teaching work) enabled him to study with Roberg Jesselson and he completed his studies with a master’s degree in music. During this time he was a cellist with the South Carolina Philharmonic Orchestra, played at concerts given by the Charleston Symphony Orchestra and the Savannah Symphony Orchestra and took lessons with Andrés Díaz (Boston Conservatory) and Paul Tobias (Manhattan School of Music).

Together with the Concordia Trio Wien from 1994 to 1998 he again studied at the Vienna Konservatorium, this time piano chamber music under the Altenberg Trio Wien. The trio graduated with distinction and took part in master classes with György Kurtág and Norbert Brainin.

It was during this time that he began his many years of work with the Hasret Ensemble (synthesis of Islamic court music, classical music and jazz), the Haydn Quartet Eisenstadt and the Concilium musicum Wien, with which he undertook concert tours around the world and participated in numerous recordings and radio broadcasts, ranging from duos to orchestral work.

He is currently concentrating on collaborating with the period instrument ensembles Orchester Wiener Akademie, Pandolfis Consort and the Aeon String Quartet, which in 2014 was invited by a Swiss foundation for the support of artists to spend some rehearsal time in residence in the Casa Zia Lina on Elba.

TAPE - Must Have - Classic Recordings