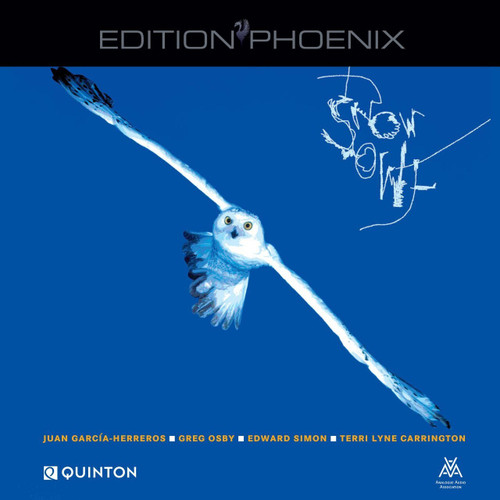 The Legend of the Snow Owl

A life of sound is a destined miracle of tears. In shakespearean legend an owl’s shriek foreshadowed the passing of a soul. In my case, the opposite occurred.It was a white owl that touched and guided my spirit from the far planes of eternity into earth’s physical realm. The white feathered guardian has summoned me here to speak the language of creation…to speak music.” The Snow Owl

In September 2014, Snow Owl has been nominated for the Latino Grammy Award! CONGRATULATIONS!

Read the review of this recording from Analog magazine

If you think about the individual sound of an electric bass player, there are not too many that you will recognize instantaneously. Eberhard Weber, Steve Swallow and of course Jaco Pastorius are great examples.

This leads us straight to Juan “Snow Owl” García-Herreros. He sounds different, too. He can sound very low, but on the other hand can make his instrument sing and sound like a flamenco guitar. These two opposites might be influenced by his South American roots: He was born in Bogota/Colombia, where the Indians of the Andes called him „The Snow Owl“, but grew up in the melting pot of New York, where he mixed up all of the different musical styles he had heard, studied and performed: Blues, Funk, Jazz, Heavy Metal, Rock, Salsa – you name it…

But what really makes the Snow Owl different is his own personal way of talking to people, and it is this open-hearted communication that you can hear in every single tone. Here, the vehicle to communicate is not only his instrument but his entire quartet.

Snow Owl
Juan Garcia-Herreros was born in Bogota, Colombia. The name Snow Owl was given to him at birth by the leader of his tribe. He came to United States and arrived in New York City at age nine. He received a coveted scholarship to attend the prestigious Berklee College Of Music in Boston.
Juan studied at Berklee with worldrenowned bass instructors Bruce Gertz and Oscar Stagnaro. By age 21 he returned to New York City to pursue a professional music career. While in New York, Juan developed the ability to meet the demands of multiple styles.
Whether the musical genre is Funk, Salsa, Straight Ahead, Modern Jazz, Heavy Metal or Avantgarde, he is capable of participating without any compromise. He has performed as a sideman with an impressive list of musicians including Thomas Lang, James Spaulding, Miguel Zenón, Yusveny Terry, Anton Denner, Oscar Hernandes, Roberto Quintero, Mark Whitfield, Michael Stuart and many others. The “Snow Owl Quartet” is his debut record as a leader.

Greg Osby
Saxophonist, composer, producer and educator Greg Osby has made an indelible mark on contemporary jazz as a leader of his own ensembles and as a guest artist with other acclaimed jazz groups for the past 20 years. Notable for his insightful and innovative approach to composition and performance of original jazz music, Osby is a shining beacon among the current generation of jazz musicians. He has earned numerous awards and critical acclaim for his recorded works and passionate live performances.

Edward Simon
Born in Cardón, Venezuela, Edward Simon arrived on the jazz scene in New York performing in a trio led by bassist Charles Fambrough. The steady gig garnered him a reputation as a pensive, rhythmically-astute player, which caught the ear of noted musicians Greg Osby, Kevin Eubanks, and Bobby Watson, all of whom hired Simon. He toured with Watson’s Horizon band for five years while juggling dates with established jazz players like Jerry Gonzales, Herbie Mann, Paquito D’Rivera and Terence Blanchard.

Terri Lyne Carrington
World-renowned drummer, composer, producer and clinician, Terri Lyne Carrington, has maintained her status in the industry as a person to watch for over 20 years. Terri developed a reputation as a child prodigy, jamming with jazz veterans Dizzy Gillespie, Rahsaan Roland Kirk, Oscar Peterson, Joe Williams, and many more. She recorded along with Joni Mitchell, Stevie Wonder and was touring with Herbie Hancock’s both his electric and acoustic bands. Right now she takes a time out from touring, concentrating on teaching in the Berklee College Of Music.