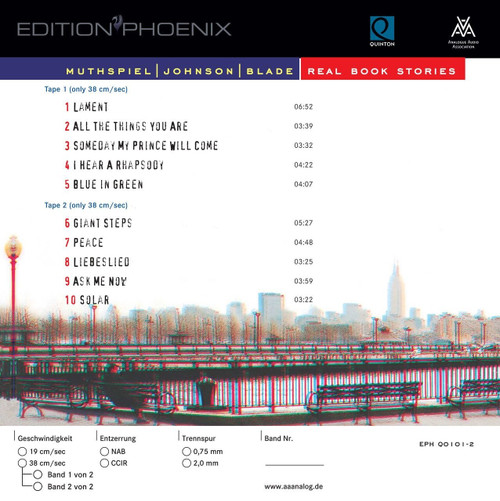 On the cover of this album you see a picture of New York taken from a less typical angle. The shot was made from Hoboken, New Jersey, where we recorded these tracks.

I come from a small town in Austria called Judenburg. When my family moved to the next biggest town, Graz, it felt like the center of the world for a few years. However, even though Graz was a lot bigger than Judenburg, it is considered „provincial“ by the Viennese. To play in Vienna for the first time seemed like the ultimate proof of being successful. Then I moved to Boston to study. From the view of Boston, New York seemed like a planet on its own, unattainable and scary. Well, I finally did move to New York City, to a place called „the village“.

I am looking at Standards from an outsider’s perspective. I grew up with Mozart, not with Ellington. I was already playing music a long time before I discovered Jazz. I like to be a foreigner, speak another language than my mother tongue. I like accents.

This is my first album of Jazz Standards. I always played them, but rarely in my concerts or on my  albums. This recording feels to me like a conversation about Standards. A conversation with two of my favourite fellow musicians about a topic I love.

Wolfgang Muthspiel about the songs:

1 – Lament
J. J. Johnson’s ballad was first introduced to me by my brother Christian, who plays trombone and loves J.J.. This one is for my father.

2 – All The Things You Are
All The Things is one of the first Jazz Tunes I learned. When Keith Jarrett’s recording
of it came out, I was finally convinced that playing Jazz was what I wanted
to do.

4 – I Hear A Rhapsody
I played this tune a lot in Gary Burton’s band and I can still hear him
turning it upside down. On this recording we never really play the melody.

5 – Blue In Green
Here all I do is play the melody over and over again.

6 – Giant Steps
The more complex the changes are, the more difficult it is to really
improvise and not play patterns. I have practiced this tune for a long time
and I now officially quit practicing it.

7 – Peace
Peace is one of my favourite tunes and one of the few Standards I play in
concerts sometimes.

8 – Liebeslied
Liebeslied was introduced to me by Herb Pomeroy, a fantastic arranger and teacher in Boston. I played it a lot with the guitarist Mick Goodrick, who taught me a world of things that seem to have nothing to do with the guitar.

9 – Ask Me Now
I played this one for the first time in Paul Motian’s Electric Bebop
Band. Like many of Monk’s tunes it is tricky and simple at the same time.

10 – Solar
Solar has one of those short forms that totally depend on what happens on top
of them. The tune is simply the vehicle for improvisation.