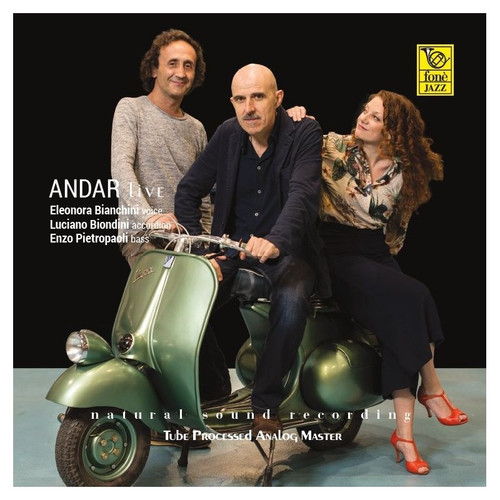 This album is part of the recordings I made on the occasion of the concerts of the 1st edition of the fonè Music Festival Piaggio 2019.
The concerts organized by Giulio Cesare Ricci were held at the Piaggio Auditorium located inside the famous Museum in Pontedera, the place where Piaggio was born and where it still continues to produce today.
Inside the Museum every year the public from all over the world can admire the Piaggio production made over the years, all the models of the Vespa and Ape, all the Aprilia, Gilera and Moto Guzzi motorcycles that have won national and international awards over time.
For each recording Giulio Cesare Ricci brought all his equipment both analog (Ampex ATR 102 Electronic Tube Ampex Model 351-1965, 2 tracks, 1/2 inch, 30ips modified by David Manley) and digital (Pyramix Recorder, dCS A/D and D/A converters).
As for the microphones he used his original collection of Neumann U47, U48, M49 in addition to the mike pre-amplifier and Signoricci cables.
This is because Giulio Cesare Ricci has always made two Masters for each recording, analog master for Vinyl and digital master DSD for SuperAudioCD.
For the production of this Super Audiophile Vinyl he used the analog master.
The mastering for Vinyl was made by Giulio Cesare Ricci using Signoricci's analog and valve system.
Also for this recording he used a "field effect" recording technique, natural sound, without the use of equalizers, no sound expansion and compression systems..... all this to bring the listener to live again in his home hifi system, the live effect as if he were present at the concert.

This album features Eleonora Bianchini voice, Luciano Biondini accordion and Enzo Pietropaoli double bass.
Enzo Pietropaoli and Eleonora Bianchini are already present in the fonè catalog with two very singular albums that see them together in this original vocal - double bass formation.
On the occasion of the fonè Music Festival Piaggio 2019, these two artists were joined by the great accordionist Luciano Biondini.
The musical result they achieved was magical, much appreciated by the large audience present at this live.
The natural sound fonè has fully enhanced all the sounds of the voice and two instruments.
The artists alternated pieces from the international repertoire such as Luka by Suzanne Vega, Never dreamed you'd leave in summer by Stevie Wonder with songs by great Italian composers of the caliber of Bruno Lauzi and Ivano Fossati ..... in trio formation.
However, each artist wanted to leave a solo musical memory: Eleonora Bianchini sang Amapola by Juan Luis Guerra, while Luciano Biondini played Geppetto by Fiorenzo Carpi and Enzo Pietropaoli a piece by Lucio Dalla - Attenti al lupo.

A live with great pathos that will be very nice to be able to listen to in Super Audiophile Vinyl fonè.

Each listener, closing his eyes, will be able to relive the emotion of the live as if he were present at the performance of these three great artists.

** check "one by one", visual check of flatness, search for any scratches, stains, etc. and sample listening tests.
** Wonderful covers, out of standard, of rare beauty, kind "Old Style" Tip-On and Old Style Gatefold Jackets, with heavy weights and 8-color print quality!