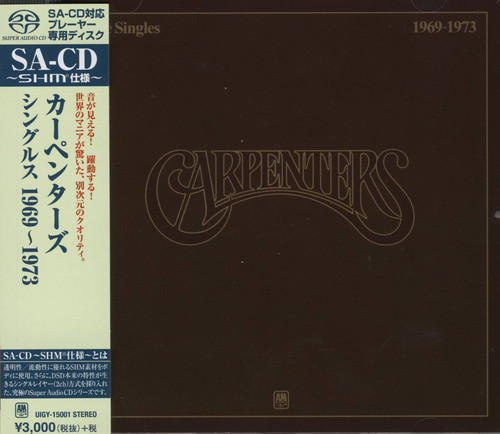 Featuring the sweet, soothing vocals of Karen Carpenter backed on vocals and accompanied by her pianist brother Richard Carpenter, this album compiles singles they released between 1969 and 1973. Richard named the album Singles 1969-1973 because he felt that "greatest hits" had been overused. The album contains true hits including "We've Only Just Begun", "Top Of the World", "Sing", and "(They Long To Be) Close To You".

This title is an SHM SACD. This format is the further development of the single-layer SACD and uses a particularly light-transparent plastic (Super High Material). It allows a much better readability of the pit-land structures on the surface than is possible with hybrid SACDs. Universal's SHM SACDs are generally re-digitized to DSD from the albums' master tapes without any changes. SHM SACDs can be played on any SACD player. Please do not use L'Art du Son or alcohol-based cleaning agents. - Please note: All titles are designed by Universal Music as limited edition collector's items for the Japanese market.