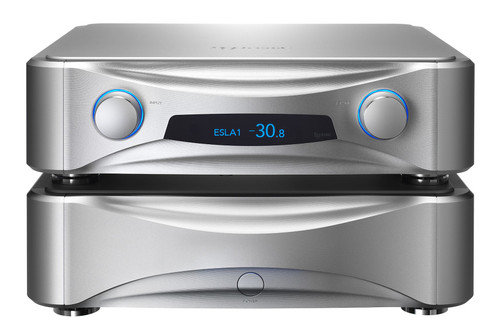 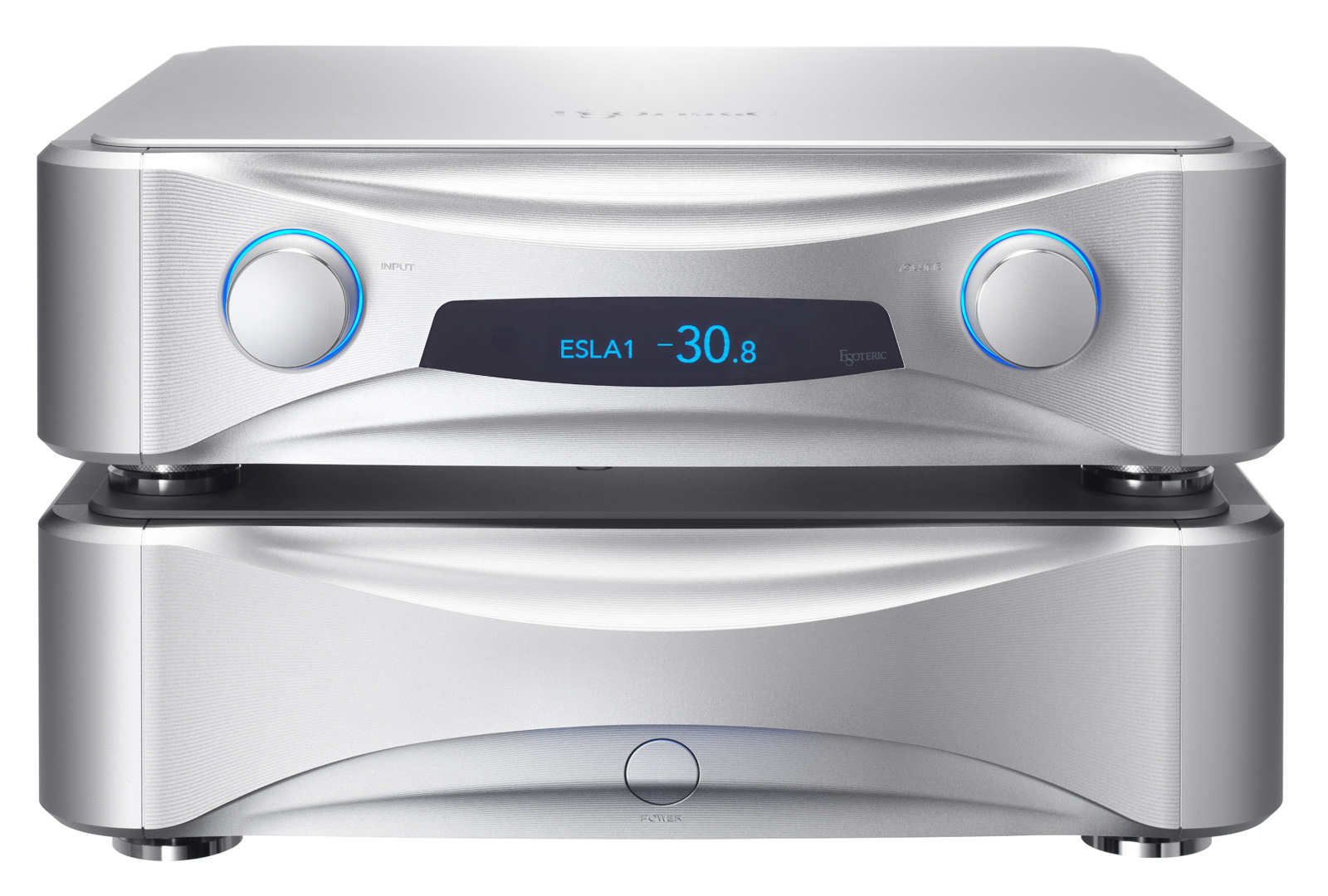 For the control center of Esoteric’s flagship Grandioso X edition, our engineers looked ahead to what lies beyond what a preamplifier should be.
In order to surpass the Grandioso C1, winner of countless awards following its 2014 introduction, we set out to thoroughly reimagine the volume control system – often considered to be the fundamental core of a preamplifier – thereby dramatically improving its precision and clarity of sound to become the standard for a new era.
Esoteric’s accumulated engineering knowledge and expertise was focused on the creation of a new preamplifier that meets the desires of the consummate audiophile.
– The new Grandioso C1X 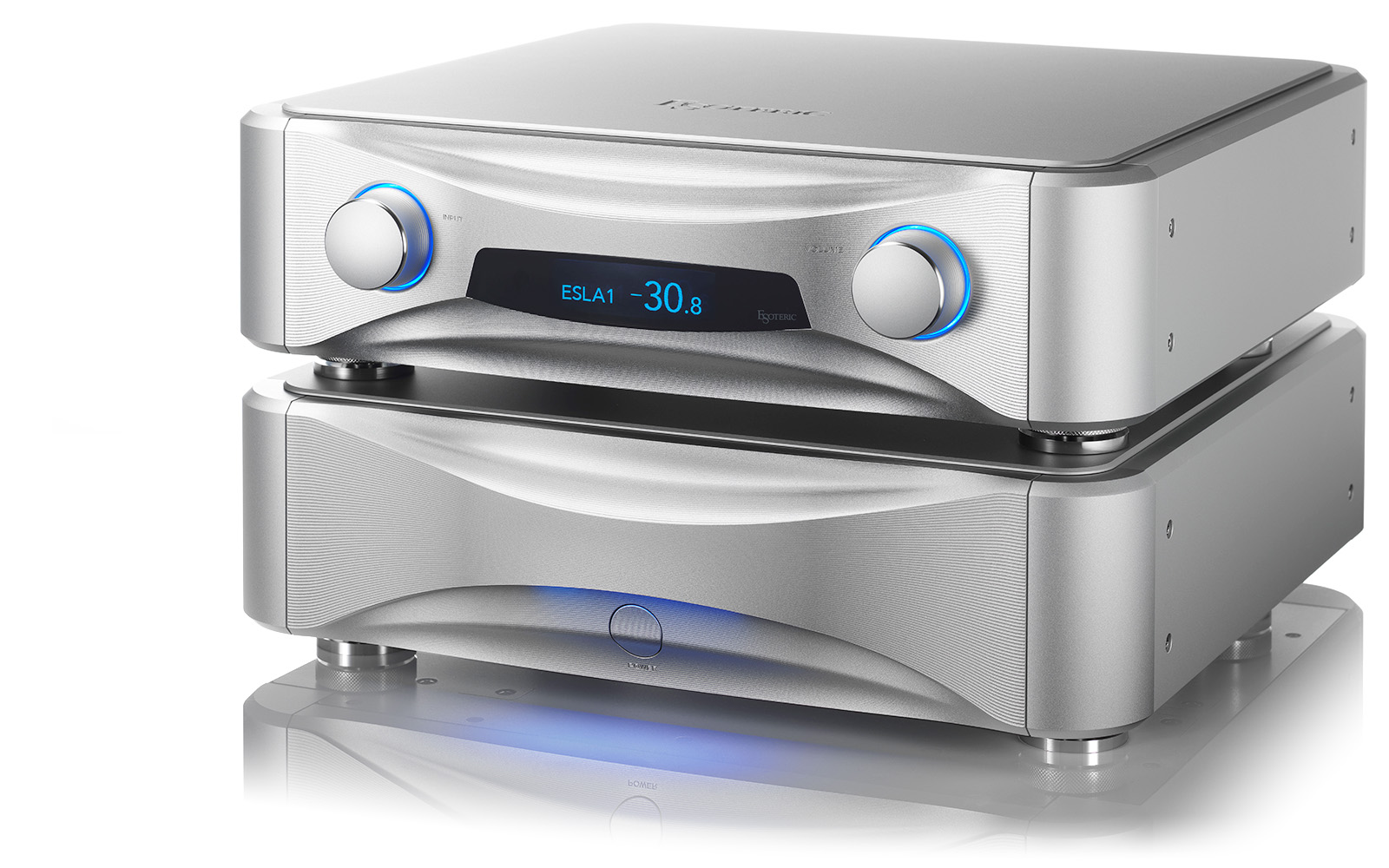 Audio expression, symphonic beauty, artistic passion, the feel of a spatial concert hall, the excitement of the audience; Esoteric’s Master Sound Works is an audio product concept that recreates all of the musical information found in original master recordings with the most state of the art technology available today.

When Fortissimo is written on the score.
When ambient music conceals the very existence of sound.
When sound reveals itself as a momentary glow in the silence.
And the roar of the audience shakes the halls of a live performance.
Grandioso stands out as a truly magnificent sound.
For the true audiophile, who meticulously adjusts the volume from track to track as the score was written,
the question is: How does one get closer to the sound at the moment it was recorded?

A Preamplifier That Draws Music.

In the world of preamplifiers there exists two fundamental types of volume control.
What are known as “fixed resistance switching attenuator circuits” are capable of bringing out some of the purest, most direct sound. This outstanding circuit delivers the best sound for preamplifiers designed to pursue the ultimate in sound quality. However, since volume is determined by switching resistors, in order to achieve a smoother, virtually stepless volume control, the size and scale of the circuit would have to become so large that it couldn’t realistically be installed in a stereo sound component.
On the other hand, so-called “variable resistance volume circuits” make possible smooth, stepless volume adjustments. However, wiring distances can be long, and inevitable crosstalk between channels and wear on the switching contacts tend to cause deterioration of sound quality over time.

Might it be possible to create a stepless attenuator circuit that can accurately set the desired volume, much like a variable resistance volume circuit, while still maintaining the excellent sound quality associated with the fixed resistance switching attenuator circuit?
Esoteric’s development team set out to challenge these two contradictory propositions.

Precision Volume Control at Your Fingertips

The C1X’s new Ultra Fidelity Attenuator System takes Esoteric’s signature Dual Mono Full Balance circuit to a whole new level, achieving an astoundingly precise 1,120 steps at 0.1dB intervals, which vastly exceeds the 100 steps at 0.5dB per step offered by the original Grandioso C1.
Our long-established Esoteric-QVCS quad circuit has undergone a complete renewal, providing an ultra high-fidelity attenuator system delivering remarkably fine accuracy volume control as well as excellent audio signal channel separation and polarity.
The new C1X brings the Grandioso series even closer to the ideal of Master Sound Works, accurately reproducing all the musical information recorded in the original master – an ideal that Esoteric amplifiers have advocated for since their inception.

The Heart of the System That Gives Life to Sound

Newly developed as a modular unit that can be used in both output and input amplifiers, Esoteric’s new IDM-01 Integrated Discrete Amplifier Module combines the advantages of a discrete configuration, which permits free selection of the individual parts that make up the circuit, and a modular form that can be assembled into a circuit having the smallest footprint possible. This new amplifier module will soon take its place as the heart of all future Esoteric amplifiers, delivering a dynamic yet delicate Esoteric sound.

The C1X’s two independent ES-LINK Analog outputs and two XLR outputs are powerfully driven by parallel Esoteric-HCLD buffer amplifiers that deliver up a remarkable slew rate of 2,000V/μs. This powerful drive can be connected to multiple power amplifiers, making it possible to confidently assemble a bi-amplified or multi-amplified system.
* Optional conversion from the ES-LINK Analog outputs to RCA outputs is available.

Additionally, the C1X’s regulated power supply features an EDLC Super Capacitor array installed in close proximity to the output buffer circuit to enable both instantaneous bursts of high power and unwavering low frequencies. Together, this conveys music’s full dynamism from the preamplifier to the power amplifier, and reproduces the source sound with breathtaking realism.

A stirring sensation of dynamism rises from the Grandioso C1X’s clear and transparent sound field.
Esoteric’s new flagship model inherits a proven two-chassis configuration,
with the main control unit and power supply created as totally separate components.
By effectively isolating the power supply unit, which can be a source of vibration and noise,
the C1X gives music an unprecedented level of quiet dynamism.

To achieve both the Grandioso C1X’s transparent sound field and its overall sense of dynamism, a separate two-chassis structure was selected as a means of physically separating the amplifier section from its power supply. The linear power supply unit is installed in a separate housing that weighs fully 29kg. This enables astoundingly clean amplification as the C1X transmits the full energy and dynamism of music to the power amplifiers while providing effortless control over the entire system. 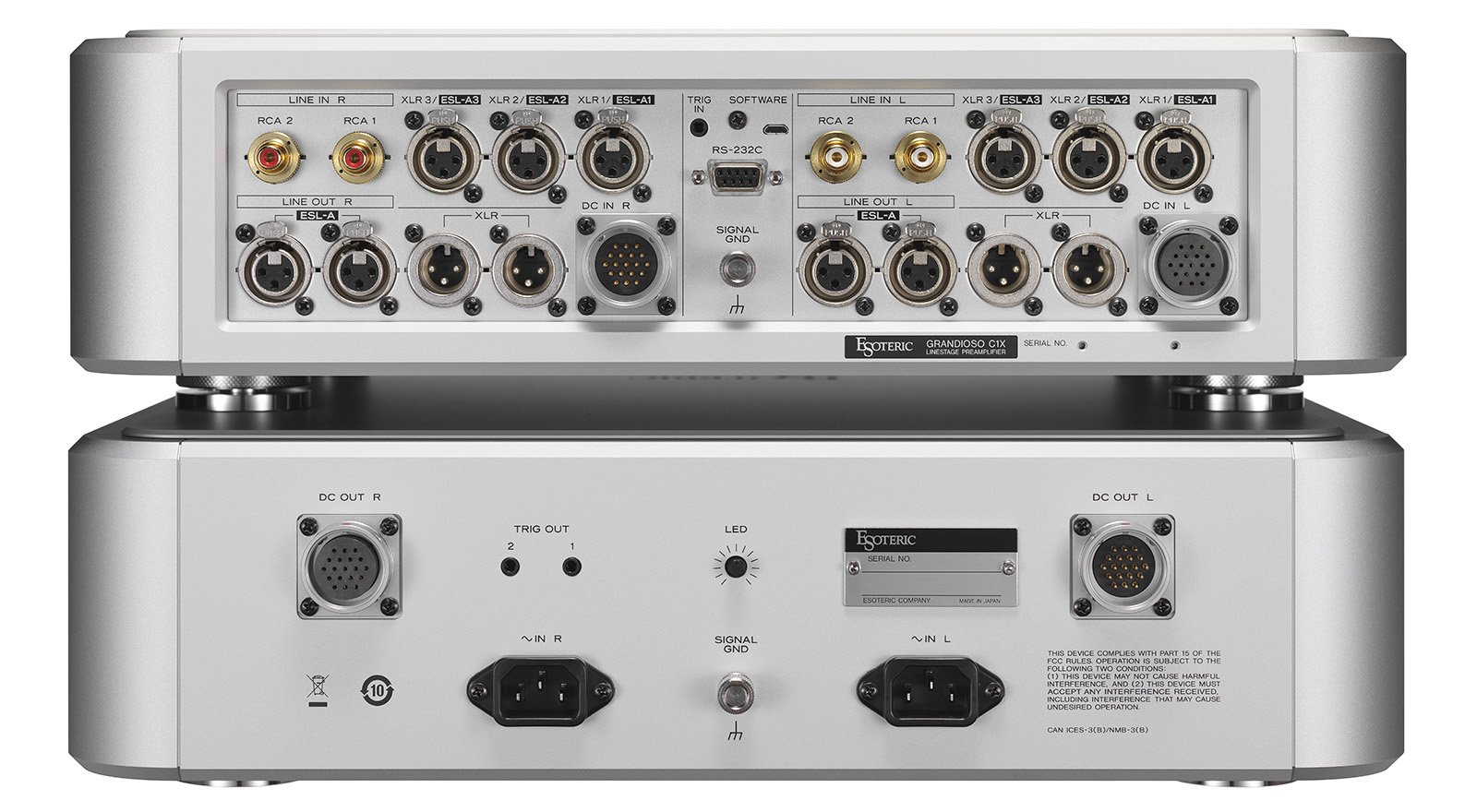 Instead of conventional mechanical relays, the Grandioso C1X features a switching system that incorporates FET elements to steadily deliver 3A of rated current output and a full 12A of instantaneous current output at musical peaks. To achieve the purity of sound required by Esoteric’s premier flagship preamplifier, current losses have been reduced to the lowest levels possible, and the effect of rare metals on contacts, including operating noise and the deterioration of sound quality over time – often associated with mechanical relays – have been totally eliminated.

The Shortest Path to a Fully Balanced Configuration

Esoteric takes special pride in its fully balanced dual circuit HOT and COLD configuration. Through the elimination of common mode noise and greatly reduced signal impedance, a pure signal, not easily affected by noise, is directed to the attenuator section along the shortest path possible.
Additionally, the input board uses a bus bar with a copper plate located at the intersection of the signal paths. It physically straddles the signal path and suppresses musical signal crosstalk across the board.
Unbalanced input signals are also balanced immediately after input, and transmitted to the attenuator circuit via the HCLD buffer amplifier for a fully balanced configuration.

The logic control unit, which controls all operations as well as the display, is located behind the front panel, where it is electronically shielded in complete isolation from the amplifier modules.
It is connected to the preamplifier section by way of a photocoupler that converts the control signal into light transmission that ensures complete physical and electronic isolation.
Furthermore, by completely shutting down the control circuit except during moments of actual operation, the Grandioso C1X is able to realize ultra-low-noise operation with no effect on audio signal circuits.

The Grandioso C1X’s Monoblock configuration ensures that left and right audio channels maintain total independence by design. These totally separate audio channels extend from the preamplifier inputs through the amplification section, and even to its separate DC power supply unit with its dual AC power cables. In fact, the C1X’s Monoblock structure effectively integrates two separate monaural preamplifiers into a single set of components that can suitably be referred to an Esoteric’s flagship.

Internal view of the Power unit 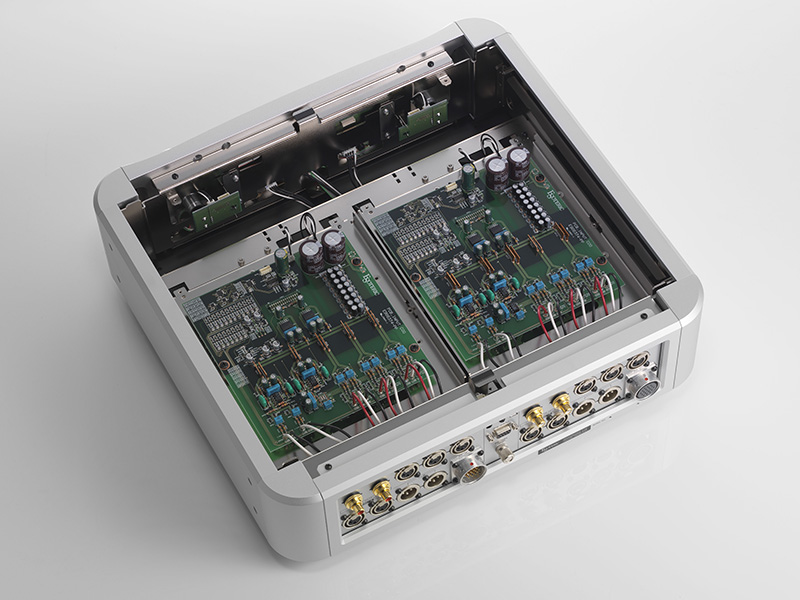 Internal view of the Main unit

From its dual AC inputs to its dual DC outputs, the power supply unit’s DC power supply features totally independent two-channel construction. In addition to these separate left and right channel input/output amplifier sections, the control unit features a total of five large power transformers together with high-capacity block capacitors, Schottky barrier diodes, and other carefully selected parts in keeping with this flagship model. Moreover, to accentuate the Grandioso series’ spacious sound, all internal circuit boards and even the units’ top plates feature a semi-floating design, while input and output circuit boards are effectively surface-mounted directly to the chassis. 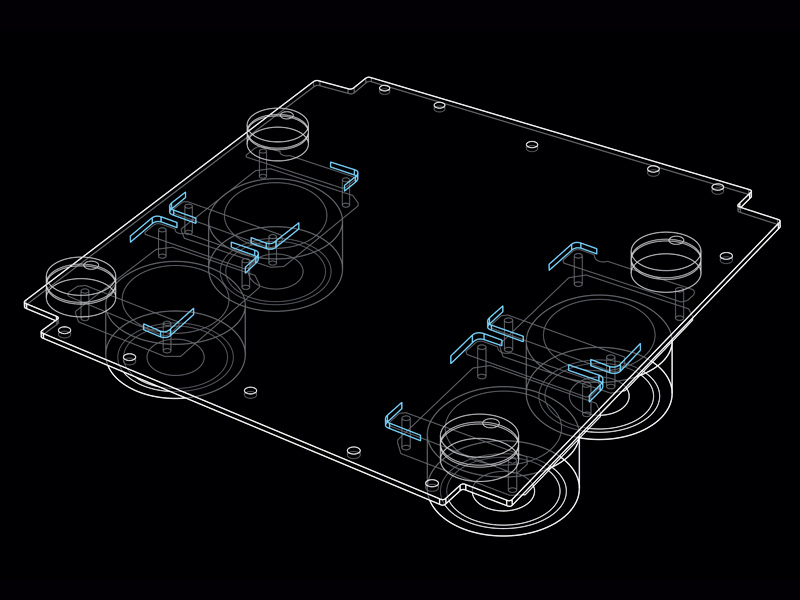 The separate power supply features multi-layer chassis construction, with circuit boards and transformers mounted on separate chassis. By mounting these components on different chassis, transformer vibration is not only greatly reduced, it is also not transmitted to the circuit boards. Additionally, the bottom chassis features high-precision laser-cut slits for the transformer mounts. These slits effectively control vibration and direct it outward through Esoteric’s patented pinpoint feet.

Satisfying Operation with a Consummate Feeling of Quality

The Grandioso C1X’s compact new remote controller is also designed to operate other Esoteric digital source devices. Its simplified functional design features buttons positioned on both sides of the unit for easy use in all scenes of operation. Highly advanced metal processing ensures that the unit’s smartphone-sized aluminum case fits comfortably in your hand, while Esoteric’s innovative approach to design allows you to experience well-thought-out operability and exceptional craftsmanship every time you pick up the remote controller. 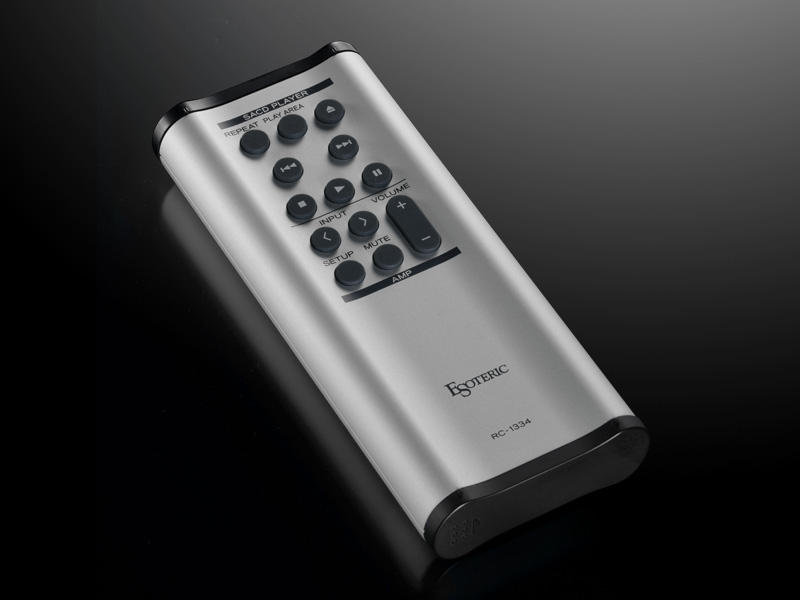 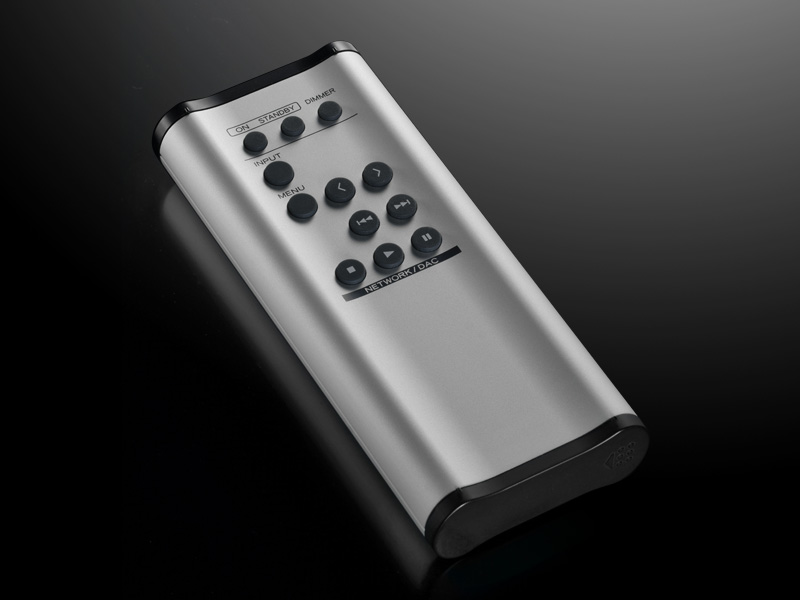