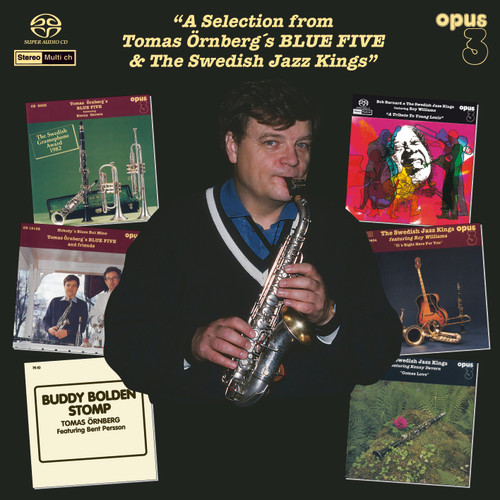 SKU:
SACD22101
UPC:
7392420221015
Availability:
Items on stock ships within 2 days. To order out of stock items, contact us on orders@sepeaaudio.com. We will update you on availability.
Shipping:
Calculated at Checkout
Format:
1x Hybrid SACD multi-channel
Genre:
Jazz
Cat.#:
SACD22101

We have made 3 albums with Tomas Örnberg´s BLUE FIVE and 3 with The Swedish Jazz Kings.

We feel that what they have done through the years is really a tribute to the Chicago Jazz era and  in many ways a recreation of the music of Clarence Williams.
Both Louis Armstrong and Sidney Bechet are of course also among the important musicians who have inspired this band.

I do not think that any band in the world has so consistently made the Classic Jazz from this time  -  1920 to 1930  -   so alive and really revived it in such an authentic and positive way!
The selection of tracks we have made from those 6 albums, has great variation and really shows the broad spectrum of the musical choice of this band!

And last but not least; featuring three outstanding guests:  Kenny Davern (cl), Roy Williams (tb) & Bob Barnard (crnt/tp) together with Bent Persson (crnt/tp), who is a regular member of the band.

TAPE - Bert Kaempfert - A Man Could Get Killed

TAPE - Bert Kaempfert And His Orchestra - A Swingin' Safari