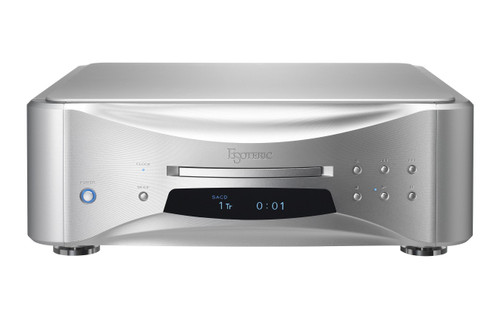 — VRDS-ATLAS and Master Sound Discrete DAC — now come to fruition in an integrated player that carries the name… Grandioso. 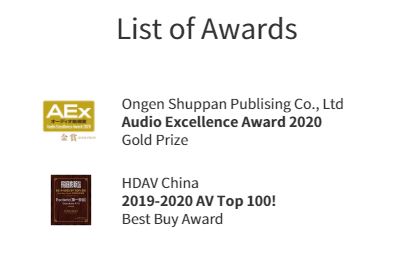 An unprecedented transport mechanism that invites you to the furthest reaches of sound. 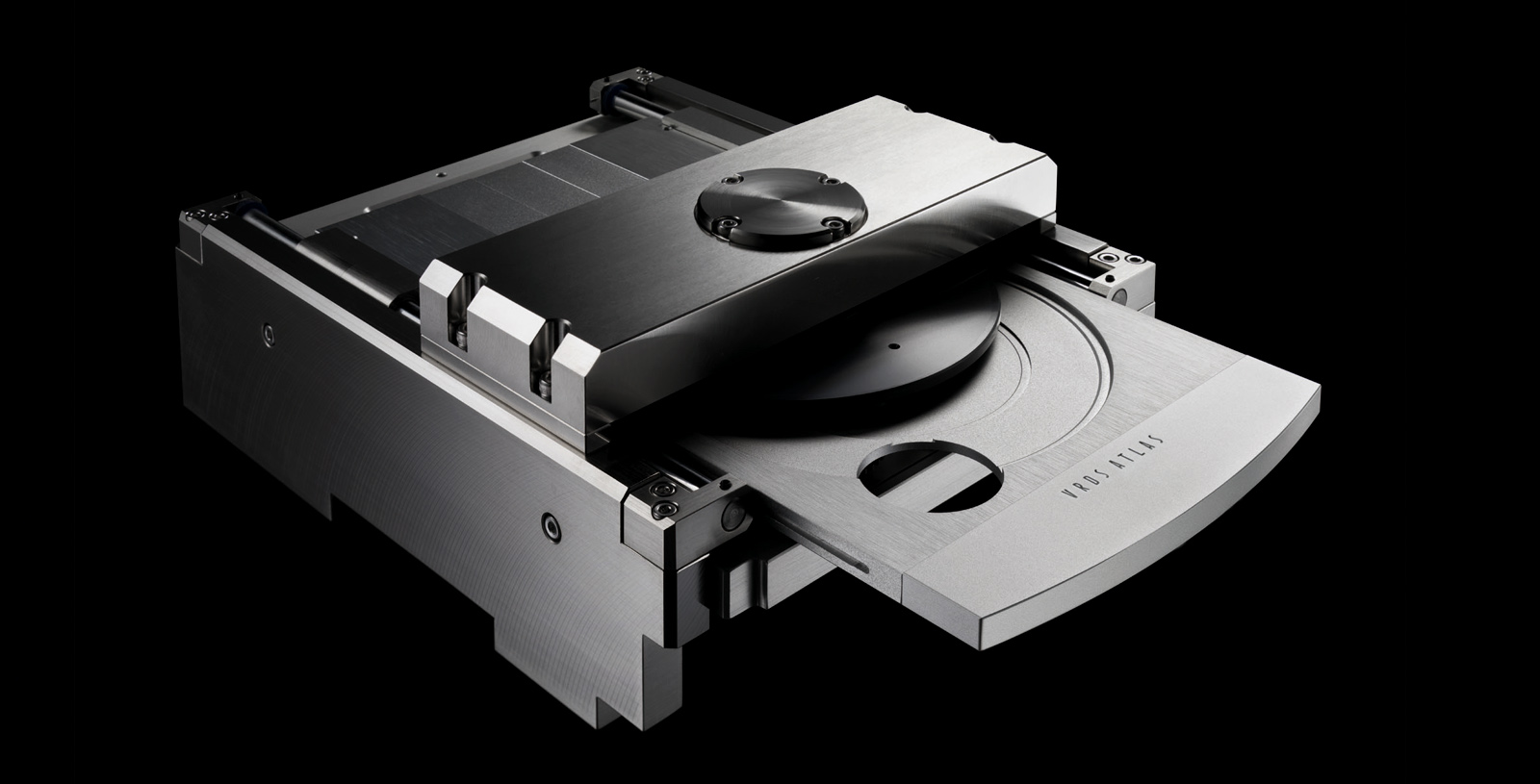 VRDS (Vibration-Free Rigid Disc-Clamping System) is Esoteric's unique CD/Super Audio CD transport technology, which has been specially designed to clamp the disc to a same-diameter turntable in order to eliminate the disc's rotational vibration, as well as any extraneous vibration emanating from the mechanism itself. It also corrects any warpage of the disc, dramatically improving the accuracy of both the optical pickup and the disc pit layer's corresponding optical axis, while also minimizing servo current. This all adds up to dramatically reduced disc read error for exceptional audio quality.

Highest Rigidity & Heaviest Construction in the 30+Year History of VRDS

The new VRDS-ATLAS platform boasts unprecedented mechanical perfection and superlative audio quality, with heavyweight construction that is fully 127% heavier than previous iterations (6.6kg for the mechanism alone, and 13.5kg including its base). This highest rigidity and weight in the history of VRDS mechanisms has the effect of greatly reducing any and all vibration that could adversely affect audio quality. The transport's larger new side panels and bridge are all formed of SS400 steel, and its turntable is made from duralumin, which is renowned for its excellent sound quality. Also, its spindle features a newly designed thrust bearing system, for a friction-free one-point spindle support system that ensures smooth, noiseless turntable rotation.

Esoteric's impressive VRDS-ATLAS is the quietest and most elegant transport in the history of VRDS. The key to achieving this was a resolute focus on mechanical grounding technology that more effectively reduces vibration.
Adopting a wide & low-profile design for the entire mechanism helped achieve a lower center-of-gravity, and relocating the turntable motor to below the turntable from its previous position above the bridge dramatically shortened the route for grounding vibration and reducing mechanical noise. Tray hollowing has also been minimized for increased rigidity, and special stoppers made from vibration-absorbing elastomer cancel out resonance when the tray is stored.

The Grandioso K1's mighty power supply was the key to its powerful and profound three-dimensional sound. With the introduction of its new X version, this power supply has been dramatically enhanced to add further depth to its exceptional audio tone. Its built-in D/A converter features independent power transformers for left and right channels, and the K1X includes a total of four independent toroidal power supply transformers. Furthermore, technologies cultivated in the development of the Grandioso P1X/D1X have also been adopted, including a new low-feedback DC power supply regulator featuring a discrete circuit configuration which contributes to its powerful open sound. The K1X also contains a total of 76 EDLC* supercapacitors (with a total capacity of 2,050,000µF or 2.05F). This greatly increased power supply capacity provides a tremendously improved sound quality for exceptional resolution in the lower frequency ranges.
*EDLC (Electric Double-Layer Capacitor):A special type of capacitor boasting an astoundingly high capacity compared to the electrolytic capacitors used in conventional audio equipment. 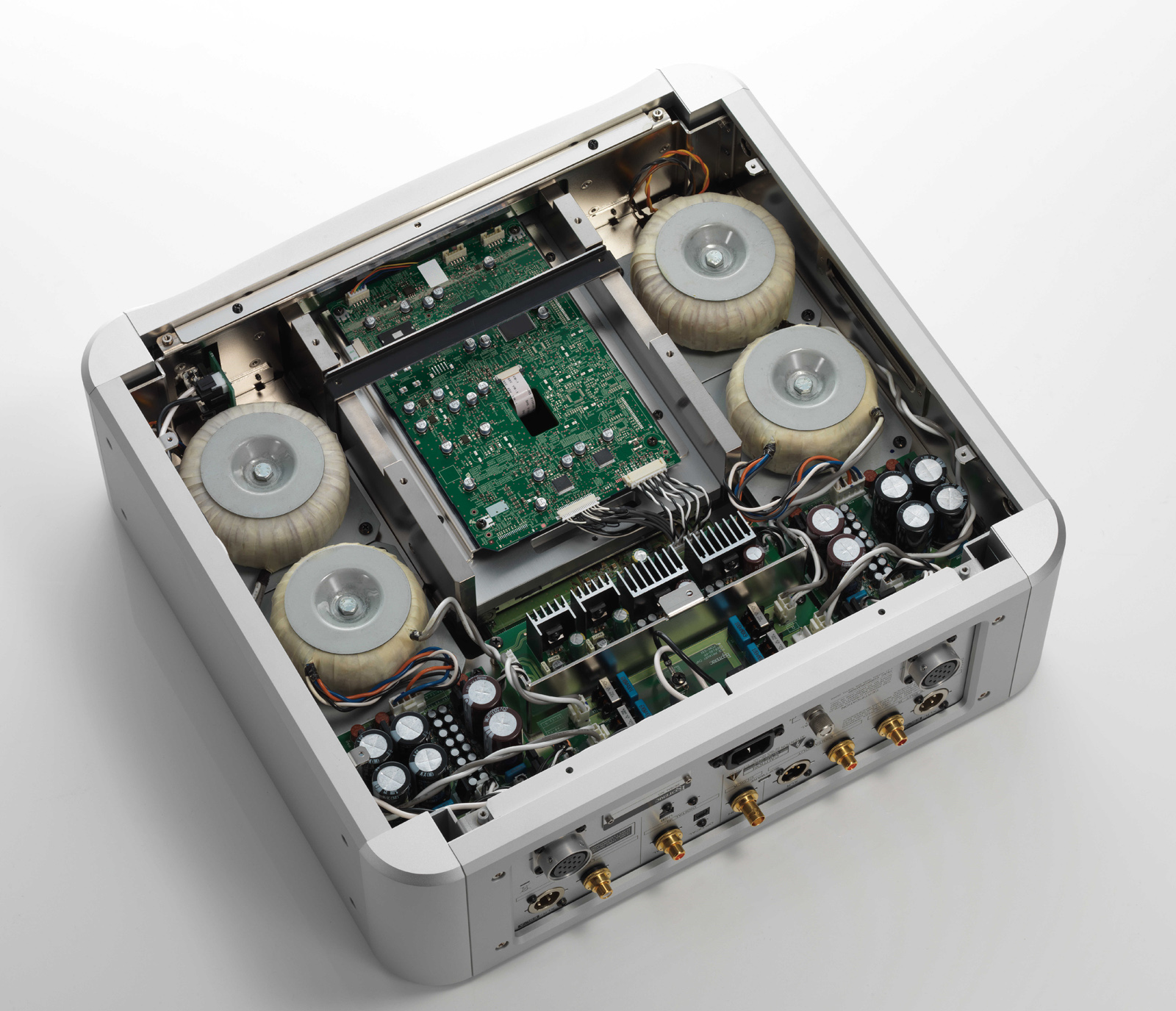 The VRDS-ATLAS transport mechanism is centrally located within the chassis, where it is fixed to a 5mm-thick steel bottom plate and supported by four proprietary pinpoint feet (patent no. 4075477 and 3778108). This effectively isolates the rotational mechanism from vibration. The internal structure of the chassis features a double deck design, with the audio boards on the upper level and power supply circuits and transformers on the lower level to minimize magnetic flux leakage and vibration, while also shortening the power supply wiring.

The enclosure's top panel utilizes a screwless semi-floating structure that further contributes to an open and expansive sound. 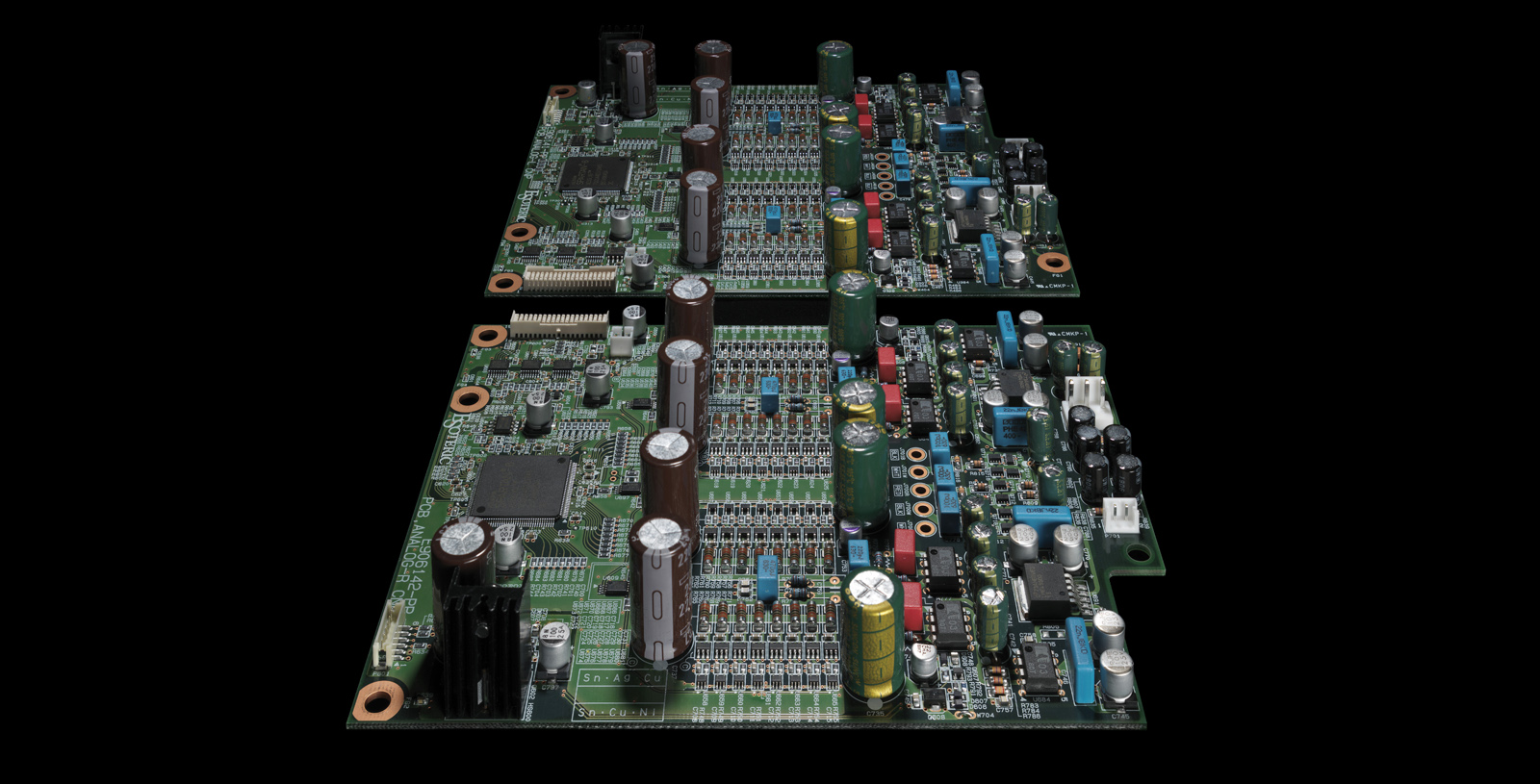 Master Sound Discrete DAC
Bringing out all the dynamics and energy of music.

Unattainable by integrated chips, our goal was to assemble carefully selected and tested discrete components into a complete circuit that could perfectly reproduce all the dynamics and energy of music. Our top engineering teams put their pride on the line to design and produce a quality of sound that can only be found in the Master Sound Discrete DAC discrete D/A converter.

The K1X's Master Sound Discrete DAC is the most revolutionary two-channel stereo DAC circuit in Esoteric's history, and is based on the original circuit developed for the Grandioso D1X monaural D/A converter.
As an extension of the D1X's design philosophy, a luxurious volume of materials have been invested in the construction of K1X's Master Sound Discrete DAC. For example, it features 32 separate elements for each channel. Key components such as a clock driver, logic circuit, and capacitors and resistors, are kept independent for each of these 32 elements to ensure the purest output without no loss of musical energy.

With a discrete DAC, where component tolerances are directly linked to arithmetic precision, highly advanced quality control is also required for the manufacture of electronic circuit boards. Esoteric's own in-house factory boasts some of the world's leading board mounting technologies, such as soldering performed in an oxygen-free furnace, which is located in a clean room featuring the same level of cleanliness found in a hospital operating room. Technologies cultivated in the production of electronic circuit boards for audio, medical, aerospace, and defense industries support the high production quality of the Master Sound Discrete DAC. 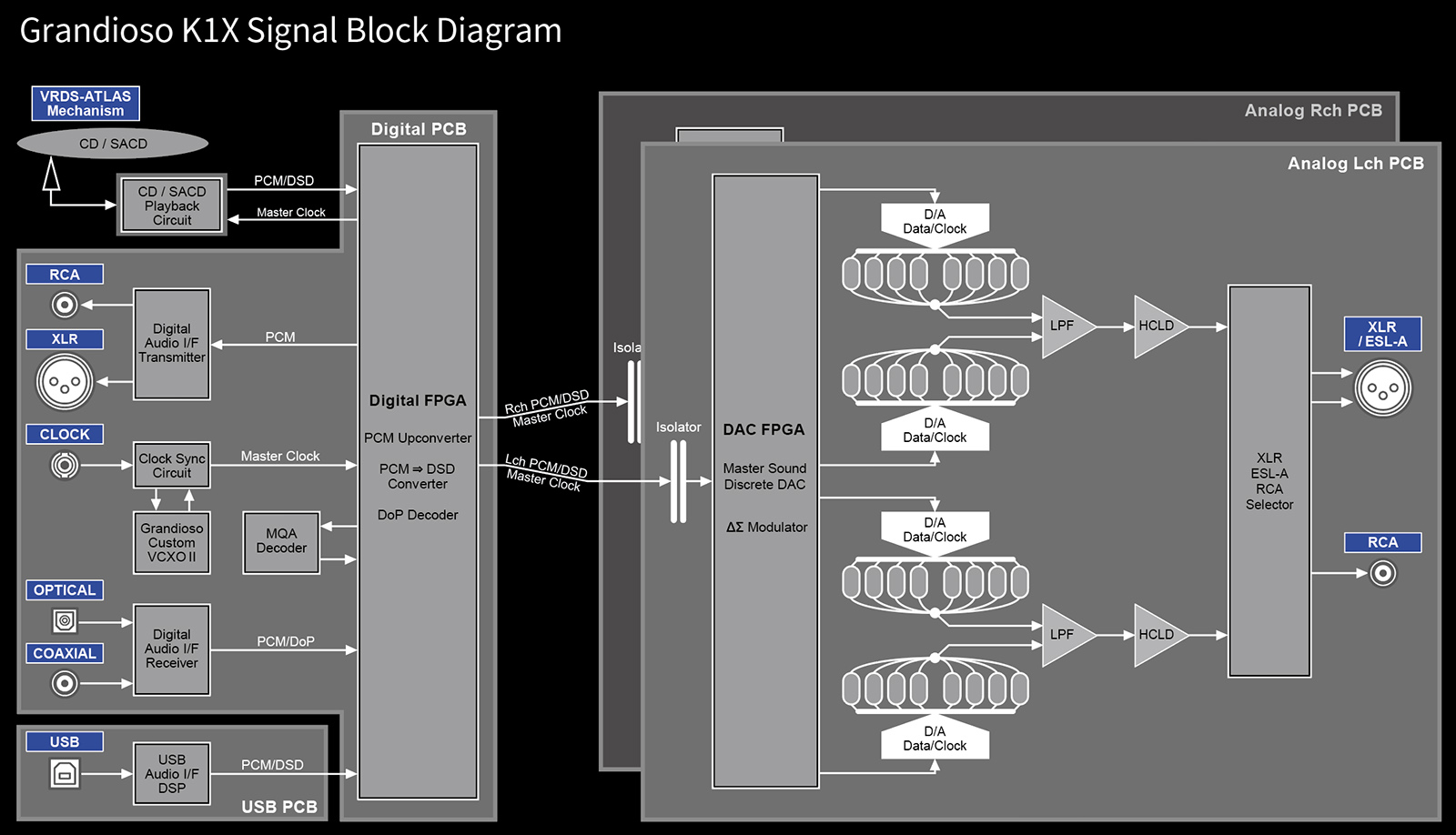 The ESOTERIC-HCLD output buffer amplifier boasts an amazingly high-speed slew rate (response speed) of 2,000V/µs. Current transmission and speed—the most important factors for an analog output circuit—have been pushed to the limits to reproduce the reality of music with a dynamic range that is truly breathtaking.
*HCLD: High Current Line Driver

A high-accuracy clock circuit is the key to achieving superlative sound quality in digital audio playback. A top-quality clock circuit is truly the heart of any high-end digital player. The K1X now features the superb Grandioso Custom VCXO II clock originally developed for the Grandioso P1X/D1X. This clock was developed with carefully considered modifications made to the earlier model's internal circuitry and components to more vividly emphasize the K1X's ultimate audio quality while further boasting remarkably low phase noise and excellent center precision (±0.5ppm).
The K1X can also be connected to the Grandioso G1 Master Clock Generator for playback, with internal circuits synchronized to a 10MHz clock that features the same high precision as an atomic clock, enabling further pursuit of high sound quality.
*VCXO: Voltage Control-type Crystal Oscillator

In addition to its coaxial and optical inputs, the K1X also features a USB type-B port that is compatible with both 22.5MHz DSD and 768kHz/32-bit PCM asynchronous signal transmission, thus enabling it to also be used as a stand-alone D/A converter. Functions are provided for upsampling a PCM digital signal to 2/4/8/16× (max. 768kHz) and converting PCM to DSD. The K1X is also compatible with MQA-CD decode playback and full MQA decoding for playback of various digital inputs including USB.