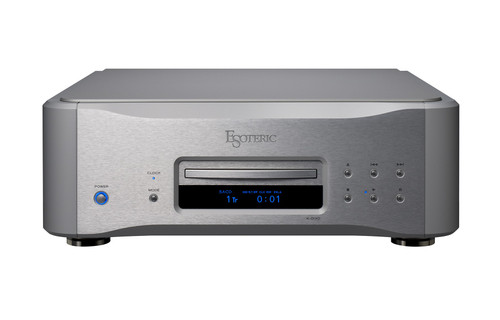 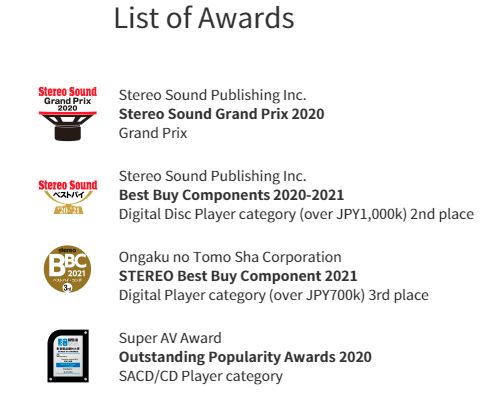 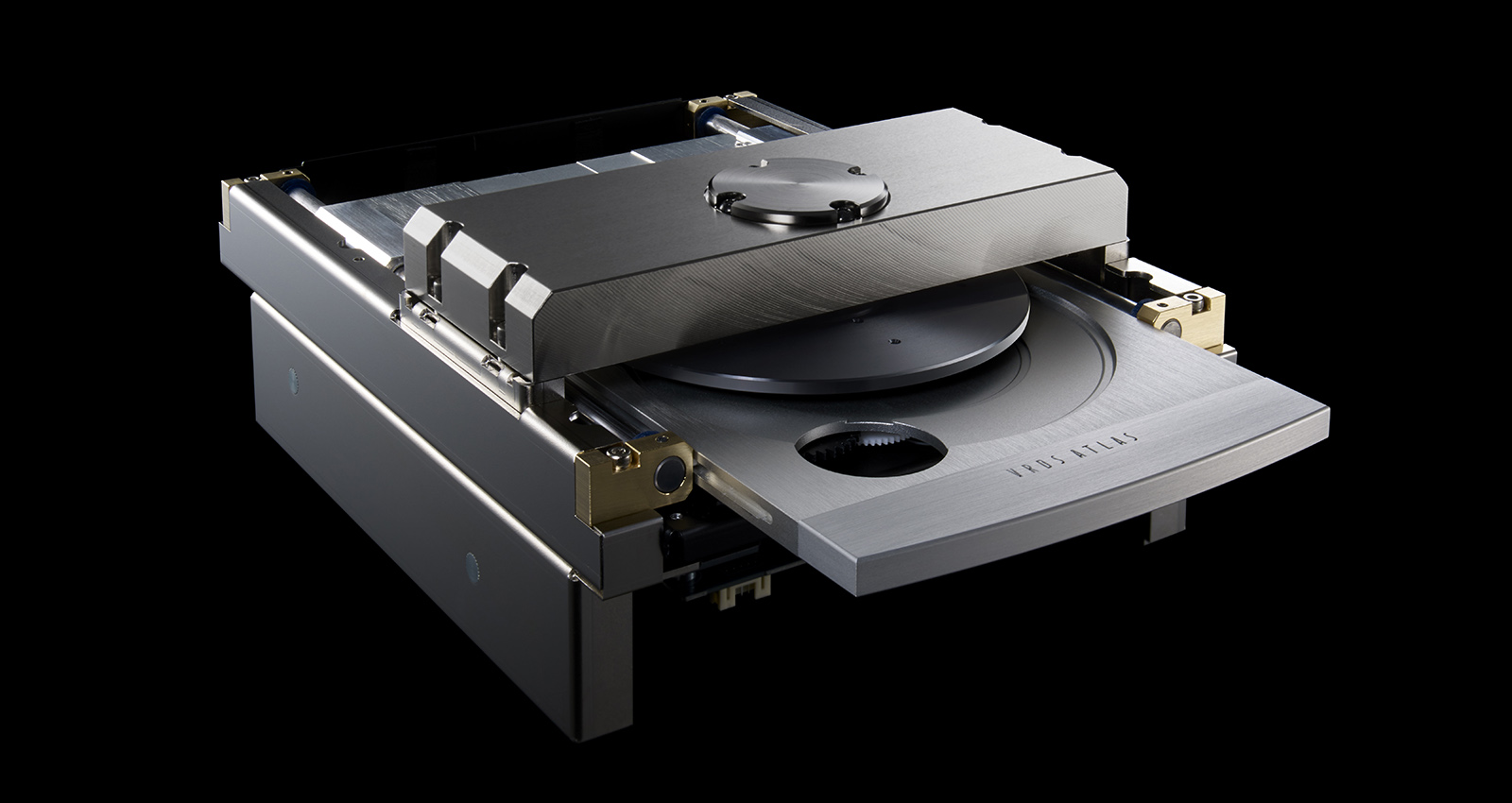 Adding VRDS-ATLAS to the K-01 series

The K-01XD’s new ATLAS 01 disk transport features a 20mm-thick SS400 steel bridge that is identical to that used in our high-end Grandioso models. The mechanism boasts ultra-high rigidity and a weighty design to damp out any vibration that could affect sound quality. The transport’s duralumin turntable also has a well-earned reputation for excellent sound quality, and its solid steel bridge is larger than that for the VRDS-NEO, using a one-point spindle bearing design that minimizes friction and rotational noise through its point-contact thrust bearing, which utilizes the same steel ball featured in the high-end models.

The key to the powerful and deeply luxurious sound quality of the K series has always been their high-performance power supplies. This new XD edition features a significantly enhanced power supply design that delivers even richer, more lifelike sound. The K-01XD is equipped with a total of four high-capacity toroidal power transformers that provide more than ample power by dedicating separate transformers to the D/A converter’s Left and Right channels, the transport mechanism, and the digital circuitry.

The higher capacity design of the K-01XD power supplies enables remarkable improvements in sound quality with enhanced resolution in the lower ranges. Their low-feedback DC power regulators minimize feedback in a discrete configuration that does away with integrated circuits by utilizing technology originally developed for the Grandioso P1X/D1X, resulting in a powerful, expansive sound. A total of 71 high-capacitance super capacitors are used in the K-01XD (total capacitance: 1,850,000μF).

The VRDS-ATLAS transport mechanism is centrally located within the chassis, where it is fixed to a 5mm-thick steel bottom plate and supported by three proprietary pinpoint feet (patent no. 4075477 and 3778108). This effectively isolates the rotational mechanism from vibration. The internal structure of the chassis features a double deck design, with the audio boards on the upper level and power supply circuits and transformers on the lower level to minimize magnetic flux leakage and vibration, while also shortening the power supply wiring. 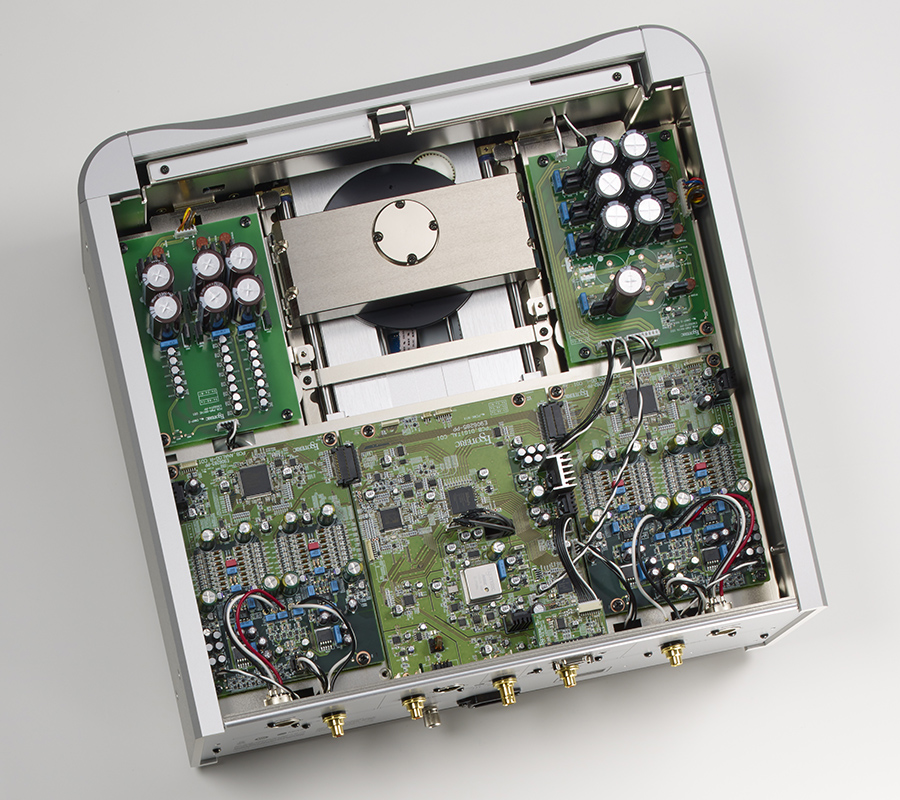 K-01XD interior (view from the top) 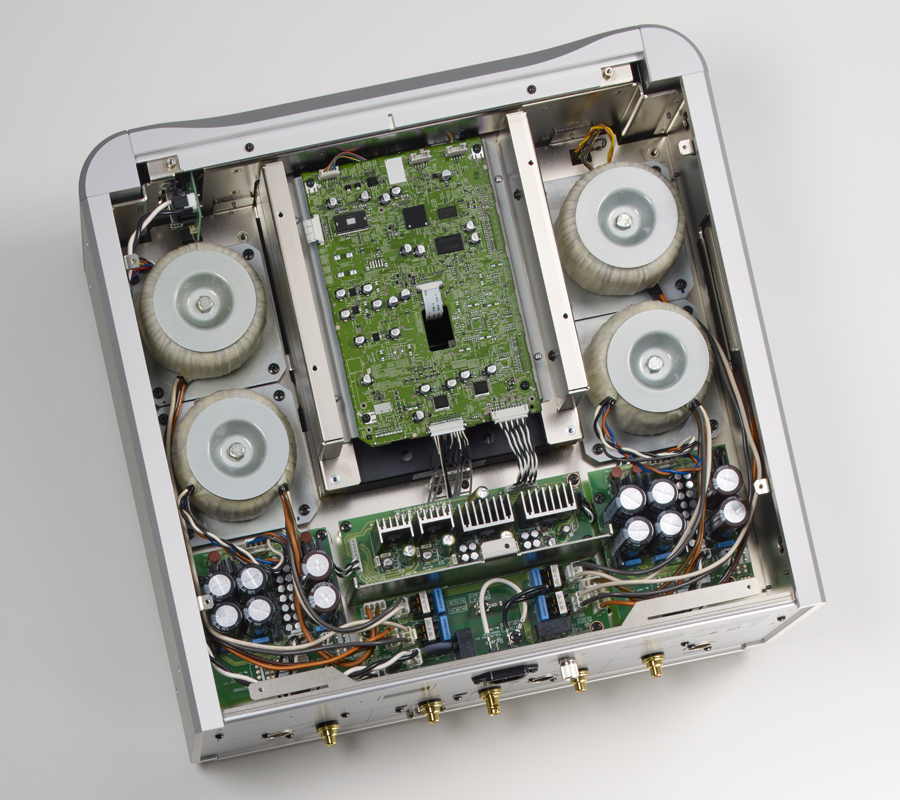 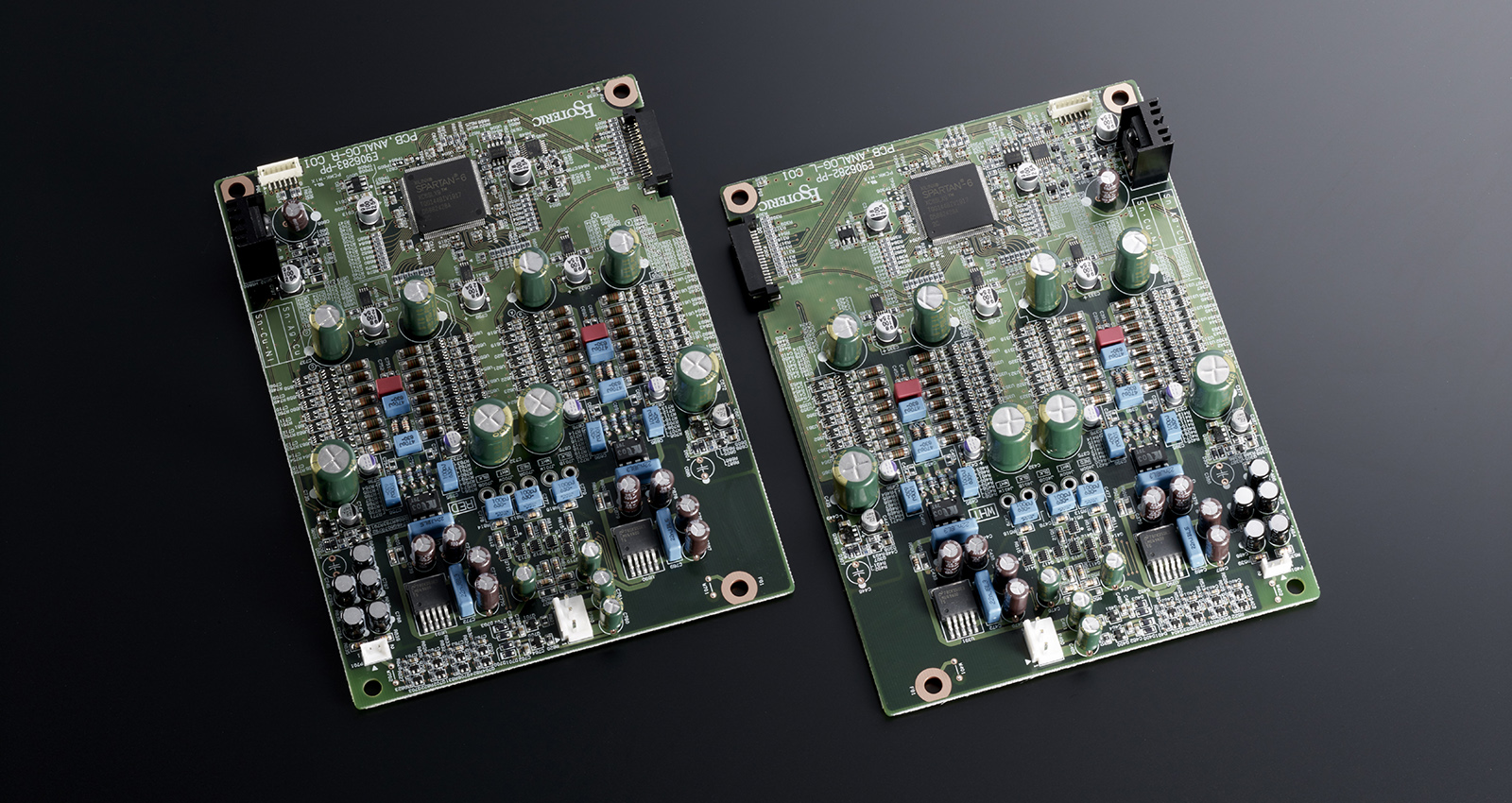 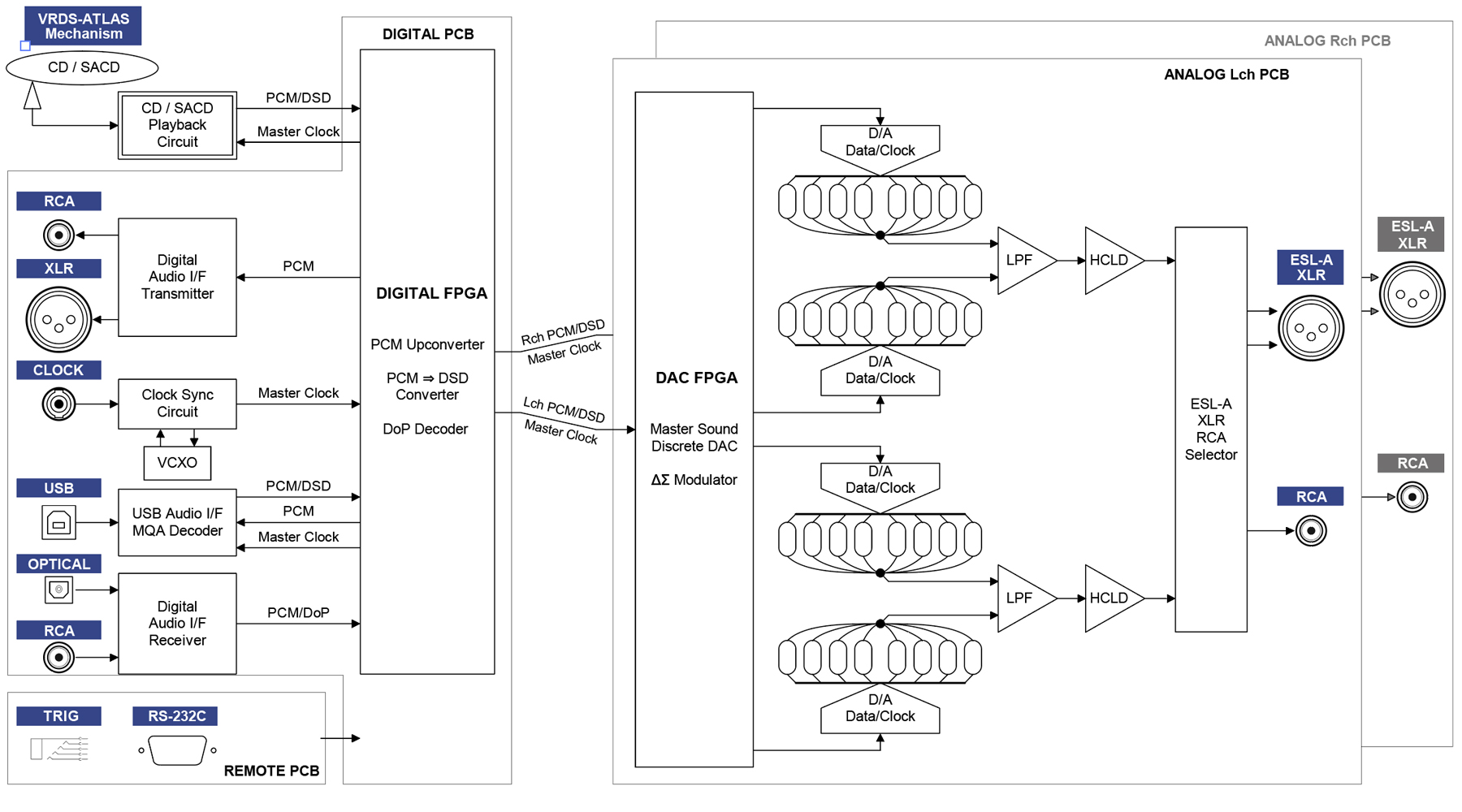 The Master Sound Discrete DAC was first introduced in the Grandioso D1X as the most innovative DAC in Esoteric history, and its astoundingly realistic sound quality has consistently drawn rave reviews for causing listeners to feel as if they were at an actual live performance. The version featured in the K-01XD uses a simpler circuit configuration that incorporates the very essence of that found in the K1X to carry the 01 series models to new heights. Consisting of 32 elements per channel, each DAC element includes clock drivers, logic circuits, capacitors, resistors, and other component parts, while each group of 32 elements is kept isolated from the main parts. In keeping with D1X design philosophy, these DACs are packed with a luxurious selection of state-of-the-art components to ensure the pure, effortless output of boundless musical energy. Only select, premium-grade high-sound-quality parts are used in the K-01XD, for an uncompromising sound that is one step above.

The K-01XD’s independently developed Delta-Sigma (Δ∑) modulator supports 64-bit/512Fs and the latest high-end digital formats, including 22.5MHz DSD and 768kHz PCM signals. The FPGA’s dedicated digital processing algorithm was developed exclusively for the Master Sound Discrete DAC, and has been fully optimized for outstanding playback of both DSD and PCM digital audio data.

The ESOTERIC-HCLD* output buffer amplifier boasts an astonishing high-speed slew rate (response speed) of 2,000V/µs. Current transmission and speed – the most important factors in the design of any analog output circuit – have been pushed to the limits to reproduce the reality of music with a dynamic range that is truly breathtaking.
* HCLD: High Current Line Drive

A high-accuracy clock circuit is the key to achieving superlative sound quality in digital audio playback, making it truly the heart of any high-end digital player. The K-01XD features the superb Grandioso Custom VCXO II clock originally developed for the Grandioso P1X/D1X. This clock was developed with carefully considered modifications made to the internal circuitry and components of other earlier models to more vividly emphasize each player’s ultimate audio quality while further boasting remarkably low phase noise and excellent center precision (±0.5ppm).
The K-01XD can also be connected to a Master Clock Generator (G-01X or G-02X) for playback, with internal circuits synchronized to a 10MHz clock that features the same high precision as an atomic clock, enabling further pursuit of the highest sound quality.
* VCXO: Voltage Control-type Crystal Oscillator

The K-01XD offers a wide range of digital inputs, including USB ports that support 22.5MHz DSD and asynchronous transmission, enabling use as a D/A converter. Functions to upconvert a PCM digital signal to 2, 4, 8, and 16 times higher bitrates (Max. 768kHz) and to convert PCM to DSD are also included. The K-01XD is also compatible with MQA-CD decode playback and full MQA decoding for playback of various digital inputs including USB.